Marketplace Pulse: The Importance of Coverage in a Post-Dobbs World

Two critical public health issues are rapidly converging. The time-limited opportunity that Congress has to protect and expand access to affordable coverage through reconciliation has taken on a heightened significance in the wake of the recent Supreme Court ruling in the Dobbs case. Since that decision, which overturned Roe v. Wade and the constitutional right to abortion, many states have moved to greatly restrict the availability of abortion. Millions of women of reproductive age now live in states where access to abortion is or will be almost nonexistent. Since approximately one half of pregnancies are unintended, these changes mean that access to contraception is more important than ever. But for many women, access to preventive health services is newly at risk. New estimates from the Urban Institute project that nearly 1 million women of reproductive age risk loss of coverage if Congress does not act to extend the expanded premium tax credits (PTCs) created by the American Rescue Plan Act (ARPA).

The Affordable Care Act (ACA) greatly expanded access to preventive services with no cost sharing. For women, these include services like screening for cancer and other diseases, wellness visits, and contraception. There are 18 methods of contraception approved by the Food and Drug Administration, and the ACA ensures that women have access to at least one form in each category without cost sharing. Today, more than 67 million women have access to preventive services, including contraception with no cost sharing, leading to an estimated $1.4 billion in savings on out-of-pocket costs. Nearly two thirds of women of reproductive age report current use of contraception, and research has shown that the no-cost access to contraception made possible by the ACA has reduced unintended pregnancies.

ARPA recently increased the affordability of plans in the ACA Marketplace by increasing subsidies and expanding eligibility for subsidies. For example, premiums were eliminated for those earning less than 150 percent of the federal poverty level (roughly $20,000 for one person, $41,000 for a family of four). The cap on subsidies at 400 percent of poverty was eliminated, and the amount spent on health insurance premiums was limited to 8.5 percent of income. As a result of these changes, enrollment in Marketplace plans increased to an all-time high of 14.5 million.

Yet these enhanced PTCs established in the ARPA will expire at the end 2022 if Congress does not act. If they expire, more than three million people are expected to drop coverage as premiums skyrocket and become unaffordable. Among these will be 850,000 women of reproductive age. To compound matters, the estimated impact of allowing the ARPA PTCs to lapse will be greatest in those states that have restricted abortion the most. For example, of the 850,000 women estimated to lose coverage, more than two thirds—nearly 600,000—live in the 12 states that have not expanded Medicaid. Most of these states have chosen to significantly restrict access to abortion. In Texas, for example, a trigger ban will take effect with no exceptions for rape or incest. Failure to renew the ARPA PTCs is projected to cause nearly 250,000 women of reproductive age in Texas alone to lose coverage, increasing the uninsurance rate among this group from 20 percent to 25 percent. Overall, ending the ARPA PTCs will increase the uninsurance rate among women of reproductive age by 17 percent in non-expansion states, as compared with 6 percent in states that expanded Medicaid.

If Congress closes the Medicaid coverage gap, it will bring about an even larger expansion in women’s coverage. Uninsurance among women of reproductive age would decline by an estimated 1.3 million if the coverage gap were closed, a reduction of more than one third. Closing this gap would have major implications for women’s access to coverage and preventive services, including contraception. This access is hugely significant in states which have largely restricted access to abortion.

The combined impact of these threats to coverage and reproductive freedom will deepen the inequities inherent in the post-Dobbs world, where low-income women, predominantly women of color, will be most likely to suffer the consequences of state laws restricting access to abortion. Congress has a crucial opportunity to expand coverage and increase access to contraception, but little time to act. 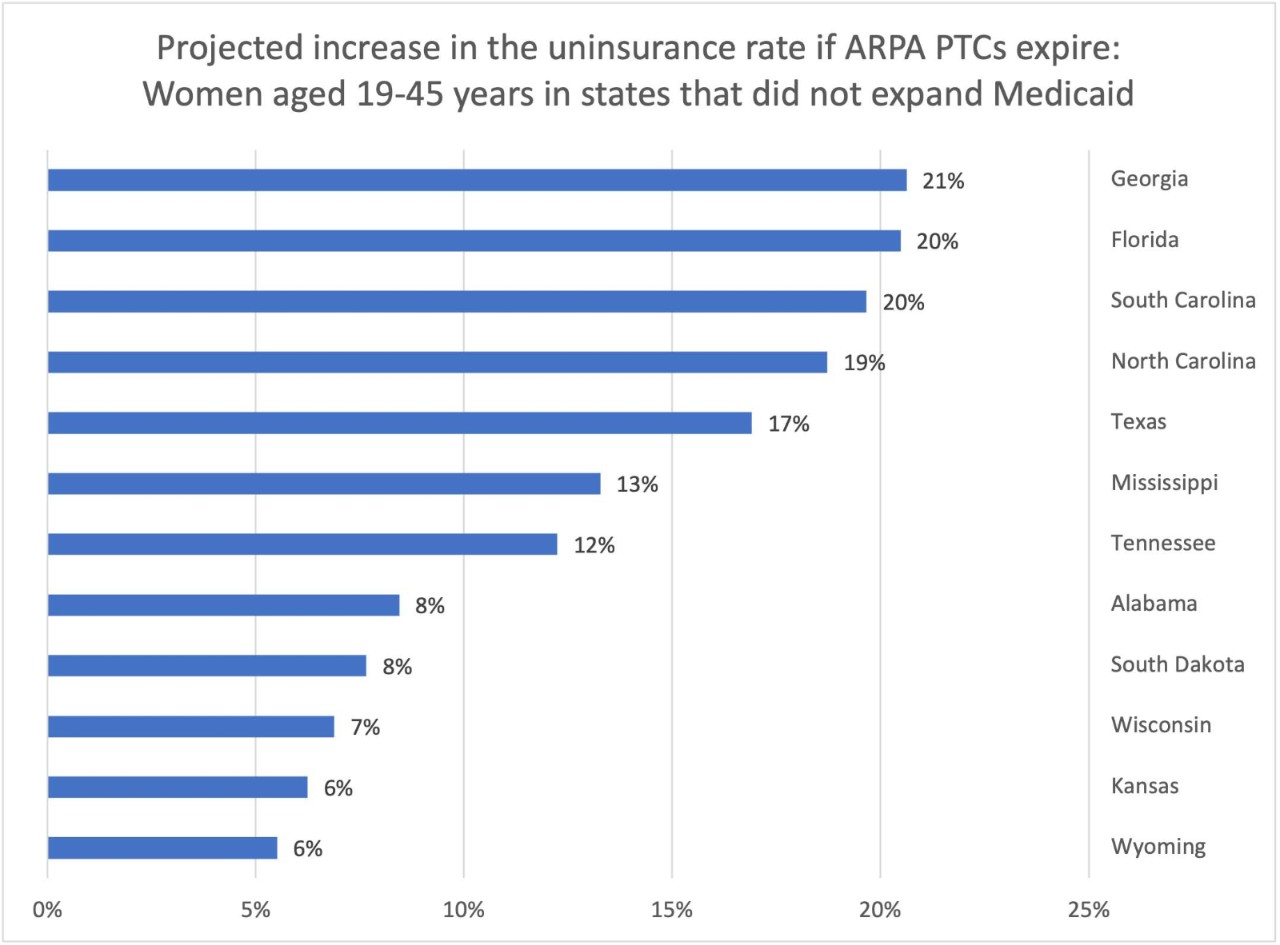 Enrollment in the ACA marketplace has risen to record levels, with 13.6 million plan selections reported as of December 15, 2021.