Marketplace Pulse: Percent of Plans with Out of Network Benefits

The threat to consumers posed by bills from out-of-network (OON) health care providers is an issue that has been gaining prominence lately, with coverage from the media and growing policymaker interest. A number of states have addressed the problem legislatively, and others are considering taking action. There has also been some interest in the issue from the federal government. One of the major settings in which OON billing occurs is in the hospital, particularly the emergency department, where providers may treat a patient but not participate in their insurance company's network. The recent news about the contractual impasse between UnitedHealthcare and Envision, a group of hospital specialists, led UnitedHealthcare to warn publicly that if they couldn't come to terms, many more consumers could face OON bills. 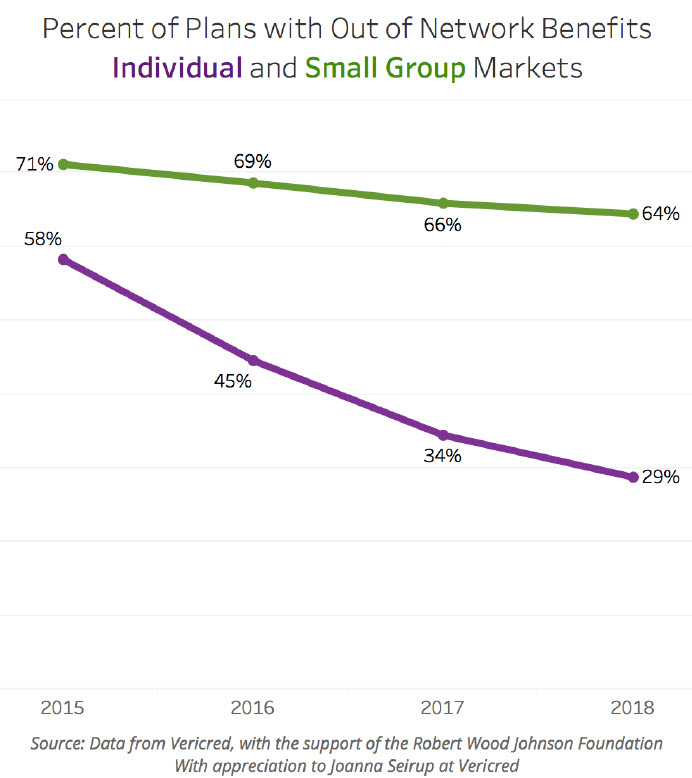 With the growing use of managed care plan designs and narrow networks, OON coverage is becoming increasingly rare. This tendency is more pronounced in the fully insured market. In the individual market in particular, there has been a steep decline in the percent of plans that offer OON coverage, from 58 percent in 2015 to 29 percent in 2018. The decline in the small group market has been far less sharp, and probably tracks more closely to what is happening in larger employer plans. Part of the difference in the two segments reflects patterns in carrier participation in the individual market. National commercial carriers, which are more likely to offer broader network plans, exited the individual market in droves in 2016 and 2017, leaving a market that is dominated by Blues and Medicaid-managed care organizations (MMCO). MMCO plans almost always offer closed-network plans, and even many Blues plans have shifted to narrow network offerings in the individual market.

After the deductible is met, cost-sharing usually takes the form of 50 percent co-insurance. This generally continues until the maximum out- of-pocket (MOOP) limit is reached. For ACA plans, the MOOP for in-network coverage is capped at $7,350 for individuals, and at about $14,700 for families. Yet for OON benefits, there is no such limit. In fact, about one-third of individual marketplace plans have no dollar amount for the MOOP, meaning that cost-sharing can continue basically forever once the deductible is reached. For plans that do have dollar limits, they are high. The median for the individual market is close to $19,000. In the small group markets this is much less common, as only 8 percent of plans with OON benefits have no MOOP limit. Median out-of-pocket maximums for plans with dollar limits are about $15,000 in the small group market.

OON bills are a source of concern to consumers, and a recent study showed that approximately 20 percent of hospital visits among patients with large group coverage resulted in an OON bill. In the case of medical emergencies, the ACA requires that OON care is reimbursed at in-network rates, although depending on state law, providers may still “balance bill” patients. Consumers with plans in the individual and small group markets have a high level of exposure to these charges. Narrow networks increase the likelihood that providers are out of network. Many plans in the small group market and most plans in the individual market do not have any OON coverage at all, and for those that do, the coverage tends to be very minimal, leaving consumers with a lot to lose in the event of an unpleasant surprise. Marketplace Pulse: The Importance of Coverage in a Post-Dobbs World

Threats to coverage and reproductive freedom will deepen the inequities inherent in the post-Dobbs world, where low-income women, predominantly women of color, will be most likely to suffer the consequences.