Marketplace Pulse: Change in Number of Carriers Offering Off-Exchange Only Plans by County 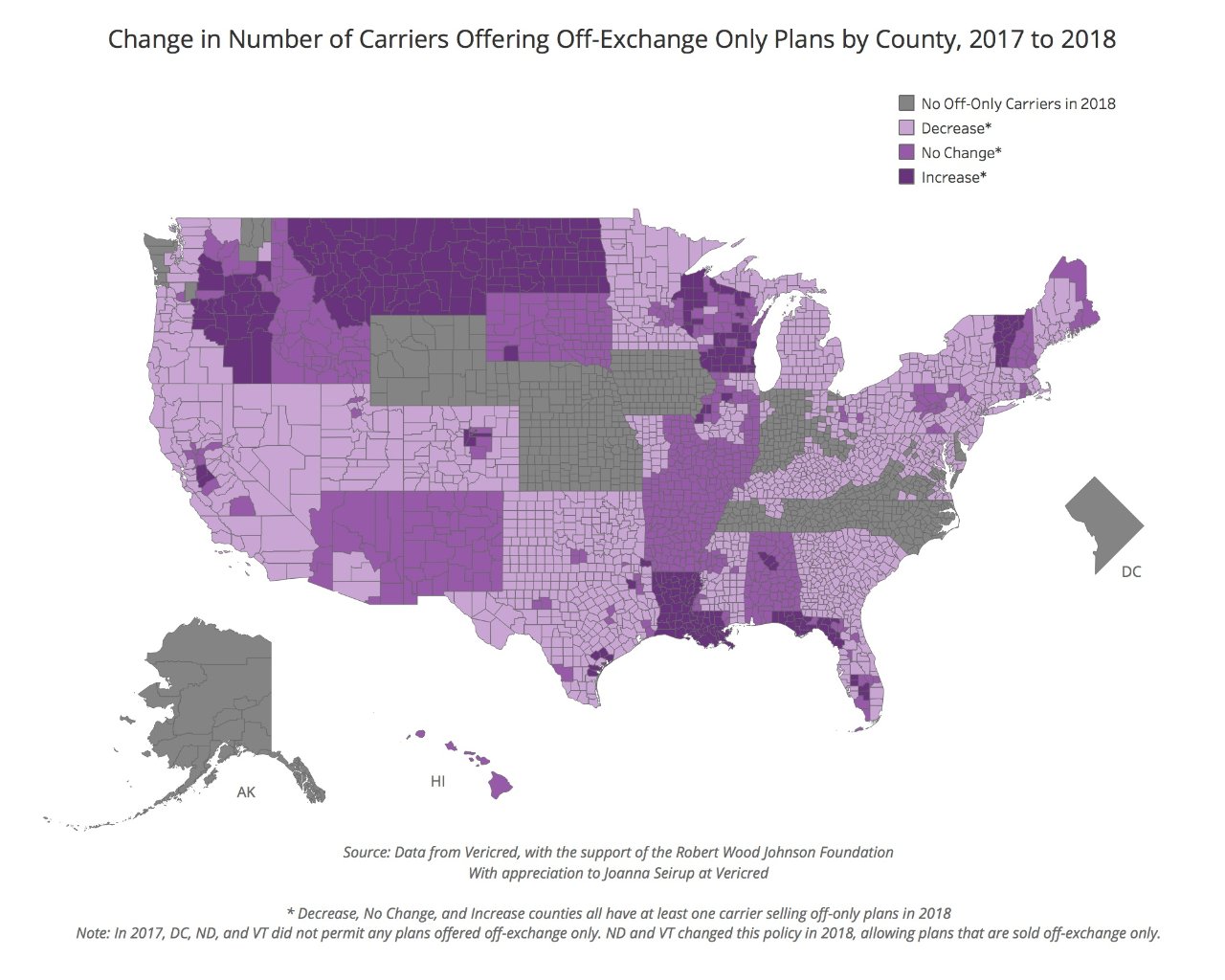 Many were surprised by the seeming robustness of marketplace enrollment this year. Yet there are reasons to expect that enrollment declines in the off-exchange segment may be more significant, due to affordability issues for the unsubsidized population. There are two main components to off-exchange enrollment: enrollment in marketplace plans directly from insurance carriers, and enrollment in ACA-compliant plans that are not available on the marketplace ("off-exchange-only" plans).

Our estimates of off-exchange enrollment come largely from financial reporting of insurance carriers, but precision is elusive, due to the difficulty of separating enrollment between on-exchange, off-exchange, and sometimes transitional or "grandmothered" products at the carrier level. The most recent estimate of total off-exchange enrollment for 2017 is about 5 million. Off-exchange enrollment most likely declined in 2018, and this trend may continue due to the elimination of the individual mandate and the potential introduction of short-term and association plans. It stands to reason that a reduction in the supply side would occur as well.

Unfortunately, it is difficult to obtain information about off-market plans, and the quality of data on these plans is not as good as that of plans available through the marketplace.* With this caveat acknowledged, we nevertheless observe a very large decline in county-level offerings of off-exchange-only plans—from about 8,700 in 2017 to about 4,000 in 2018. To put this in context, the percentage of counties without off-exchange plans grew from about 5 percent in 2017 to approximately 25 percent in 2018. At the state level, there are eight states with no off-exchange-only plans in 2018, versus five in 2017.**

Exits from the off-exchange were seen among all types of carriers. One significant driver of this decline was the virtually complete withdrawal of national commercial insurers from the individual market as a whole, many of which only sold off-exchange-only plans. Another major category is the large exodus by issuers that only sell in the off-exchange. This includes companies such as Freedom Health, which also sells limited duration plans, some of which are explicitly paired with an off-exchange-only offering as a backstop. The small amount of entry which occurred accompanied more general market entry, and in some cases, may have been part of a state's silver-loading strategy, in which off-exchange plans can have lower premiums.

From our vantage point today, these trends do not seem likely to reverse soon, as the unsubsidized segment of the ACA market will most likely continue to be challenging, at least in the short run. If and when affordability returns, it remains to be seen whether there will be a resurgence in the market for off-exchange-only plans.

*  In past years, we have used certain CMS sources to fill in information about off-market plans that we were unable to locate in other sources. Due to their unavailability in 2018, there are some off-exchange plans that may not be included, which may upwardly bias our estimate of the decline in the number of off-exchange plans between 2017 and 2018. Many of the missing plans are likely “ghost plans”—i.e. plans that have been filed but not commercialized, meaning that carriers have not marketed the plans or shared any plan data with brokers. Yet despite these limitations, we believe this is the most comprehensive data on the off-exchange market available. Marketplace Pulse: After the Silver Load

CMS announced shifts in marketplace enrollment by metal in 2018. Due to quirks introduced by the elimination of cost-sharing reduction payments, subsidy-eligible customers found they could get better deals by choosing bronze or gold. Despite general problems in the ACA marketplace, such as high premiums and lackluster carrier participation, current conditions are quite stable.