“Even though there are many programs aimed to help families with food costs, much higher rates of Black, Latino, and Native American households currently say they are facing serious problems affording food. This is likely to have major immediate and longer-term health consequences for millions of families,” said Mary Findling, Assistant Director of the Harvard Opinion Research Program at Harvard T.H. Chan School of Public Health.

In addition, a wider share of Black renters (16%), Native American renters (21%) and Latino renters (10%) say they have been evicted or threatened with eviction in the past year than White renters (9%, see Figure 1). Only 4 percent of Asian renters reported eviction or threats of eviction.

“The serious problem of inflation is impacting Black families more than many other Americans. Millions of households led by people of color across the nation are facing distinct, serious financial problems during this period, including many who are being threatened with eviction and face unsafe conditions in their neighborhoods, with few options to help,” said Robert J. Blendon, co-director of the survey and Richard L. Menschel Professor of Public Health and Professor of Health Policy and Political Analysis Emeritus at Harvard T.H. Chan School of Public Health.

While more than 6 in 10 people of all racial and ethnic groups reported a lack of affordable housing to rent or buy, the condition of the neighborhoods where they lived varied. Black, Native American, and Latino families were significantly more likely to report serious problems with air and water quality, access to good jobs, and access to parks and greenspace.

"These poll findings are a reminder that while everyone is impacted by today's inflation and economy, we're not all feeling the same pressures in the same ways," said Alonzo Plough, Vice President for Research and Evaluation and Chief Science Officer at Robert Wood Johnson Foundation. "These differences are the result of policies and practices that have created fewer opportunities in some communities and we need solutions that are designed to build a more equitable future."

In addition, across racial/ethnic groups in America, housing affordability and crime are currently viewed as a serious neighborhood problems by substantial shares of adults today. Majorities of adults across racial/ethnic groups (74% of Latinos, 65% of Asians, 65% of Whites, 61% of Blacks, and 61% of Native Americans) say lack of affordable housing to buy is a serious problem in their own neighborhoods. On crime, 40 percent of Native American adults, 35 percent of Black adults, 35 percent of Latino adults, 28 percent of White adults, and 22 percent of Asian adults say crime is currently a serious problem in their own neighborhoods. 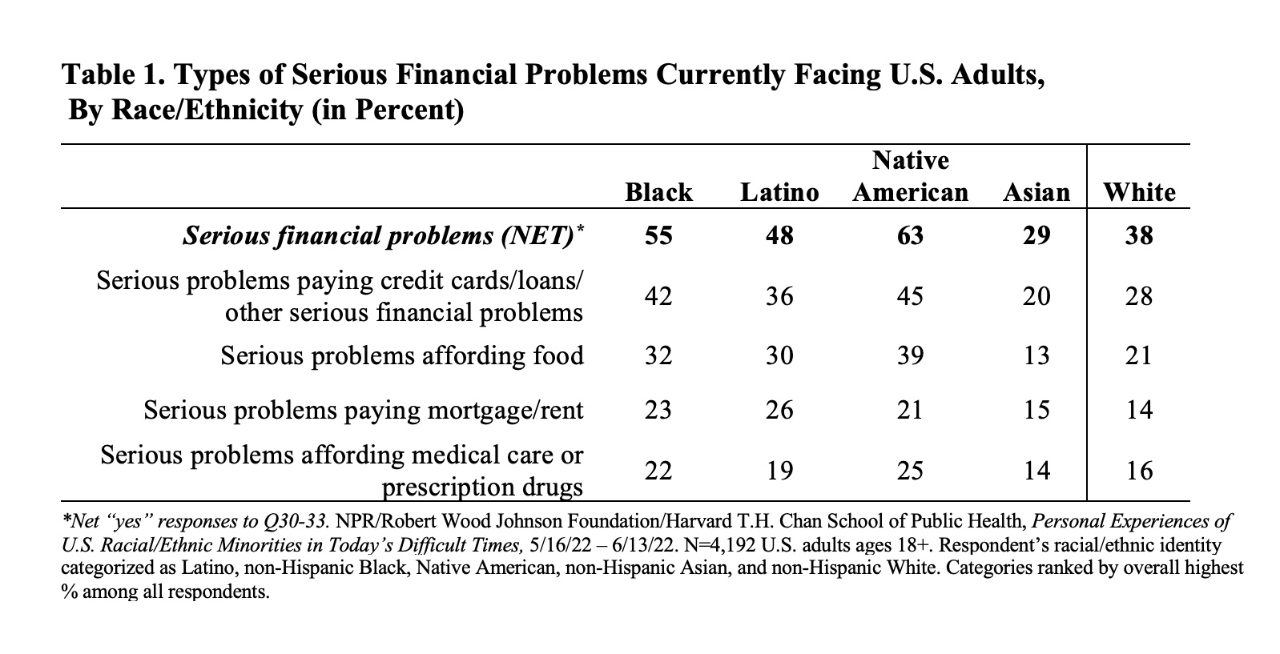 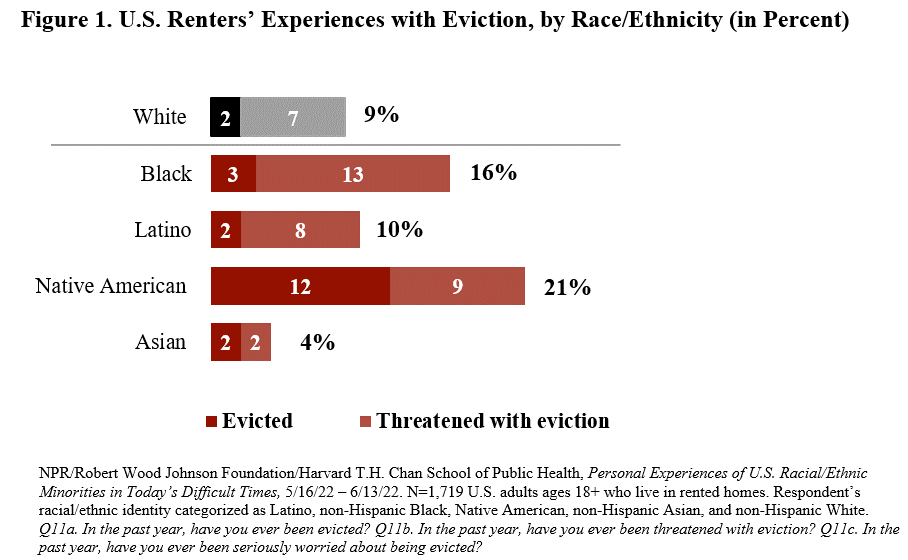 The poll in this study is part of an on-going series of surveys developed by researchers at the Harvard Opinion Research Program (HORP) at Harvard T.H. Chan School of Public Health in partnership with the Robert Wood Johnson Foundation and NPR. The research team consists of the following members at each institution.

Interviews were conducted online and via telephone (cellphone and landline), May 16–June 13, 2022, among a nationally representative, probability-based sample of 4,192 adults age 18 or older in the U.S. Data collection was conducted in English and Spanish by SSRS (Glen Mills, PA), an independent research company. The survey included nationally representative samples of White, Black, Latino, Asian, and Native Americans.

The sample consisted of two main components: (1) An address-based sample (ABS), with respondents randomly sampled from the United States Postal Service’s Computerized Delivery Sequence (CDS) file. These sampled households were sent an invitation letter including a link to complete the survey online and a toll-free number that respondents could call to complete the survey with a telephone interviewer. All respondents were sent a reminder postcard, which also included a QR code they could scan to be linked to the survey via a smart device. Households that could be matched to telephone numbers and that had not yet completed the survey were called to attempt to complete an interview; (2) Respondents reached via the SSRS Opinion Panel and the Ipsos Knowledge Panel, two online probability-based panels that recruit respondents through address-based sampling. In order to represent hardest-to-reach populations, address-based sampling was supplemented by interviews using Advanced Cellular Frame (ACF), a random sample of cellphone numbers. A total of 3,791 respondents completed the questionnaire online and 401 by telephone.

Respondents self-reported their own race/ethnicity.

**Native Americans are those who report their main racial/ethnic identity as American Indian or Alaska Native.

Possible sources of non-sampling error include non-response bias, as well as question wording and ordering effects. Non-response produces some known biases in survey-derived estimates because participation tends to vary for different subgroups of the population. To compensate for these known biases and for variations in probability of selection within and across households, the samples were weighted to match the distribution of the population based on data from the U.S. Census Bureau’s 2021 Current Population Survey (CPS). Weighting parameters included: gender, age, education level, race/ethnicity, region, and party identification.

About the Harvard T.H. Chan School of Public Health

Harvard T.H. Chan School of Public Health brings together dedicated experts from many disciplines to educate new generations of global health leaders and produce powerful ideas that improve the lives and health of people everywhere. As a community of leading scientists, educators, and students, we work together to take innovative ideas from the laboratory to people’s lives—not only making scientific breakthroughs, but also working to change individual behaviors, public policies, and health care practices. Each year, more than 400 faculty members at Harvard Chan teach 1,000-plus full-time students from around the world and train thousands more through online and executive education courses. Founded in 1913 as the Harvard-MIT School of Health Officers, the School is recognized as America’s oldest professional training program in public health.

NPR connects to audiences on the air, online, and in person. More than 26 million radio listeners tune in to NPR each week and more than 30 million unique visitors access NPR.org each month, making NPR one of the most trusted sources of news and insights on life and the arts. NPR shares compelling stories, audio and photos with millions of social media users on Facebook, Twitter, Instagram, Pinterest, YouTube and Snapchat; NPR News and NPR One apps, online streaming, podcasts, iTunes radio and connected car dashboards help meet audiences where they are. NPR's live events bring to the stage two-way conversations between NPR hosts and the audience in collaboration with the public radio Member Station community. This robust access to public service journalism makes NPR an indispensable resource in the media landscape.

The Robert Wood Johnson Foundation (RWJF) is committed to improving health and health equity in the United States. In partnership with others, we are working to develop a Culture of Health rooted in equity that provides every individual with a fair and just opportunity to thrive, no matter who they are, where they live, or how much money they have. For more information, visit www.rwjf.org. Follow the Foundation on Twitter at www.rwjf.org/twitter or on Facebook at www.rwjf.org/facebook.