2020 update: A national survey explores how adults in the United States think about health on a personal, community and societal level.

Typology reflects diversity of values and beliefs toward health.

The American Health Values Survey explores how adults in the United States think about health on a personal, community, and societal level. The survey measures the importance of personal health, how individuals define health and how it manifests in everyday behaviors. There are also measures of what adults in the United States believe about the social determinants of health, the role of government in addressing them and what they value most for their own communities.

The Robert Wood Johnson Foundation worked with researchers from NORC at the University of Chicago to better understand the extent to which health is a shared value in the United States.

The survey has been conducted two times. Data for wave 1 of the survey was collected in 2015–2016 with wave 2 administered in 2019–2020. A probability-based, representative sample of adults living in the United States was surveyed by phone (landline and cell), online, or mail for each wave. The wave 1 data set included 10,574 respondents. The wave 2 data set included 8,261 respondents.

Overview of the Typology

Using the results from the survey, the researchers created a typology or classification of U.S. adults based on their health values and beliefs. There are six different groups within the typology: Committed Activists, Equity Realists, Equity Idealists, Self-Reliant Individualists, Disinterested Skeptics and Private-Sector Champions.

Most adults (55%) fall into one of the first three groups, which are generally supportive of efforts to build healthier and more equitable communities. About 33 percent fall into groups that are skeptical about the promotion of health and health equity in the United States (Self-Reliant Individualists and Disinterested Skeptics), and the remaining 12 percent fall into a group (Private-Sector Champions) that has mixed views. 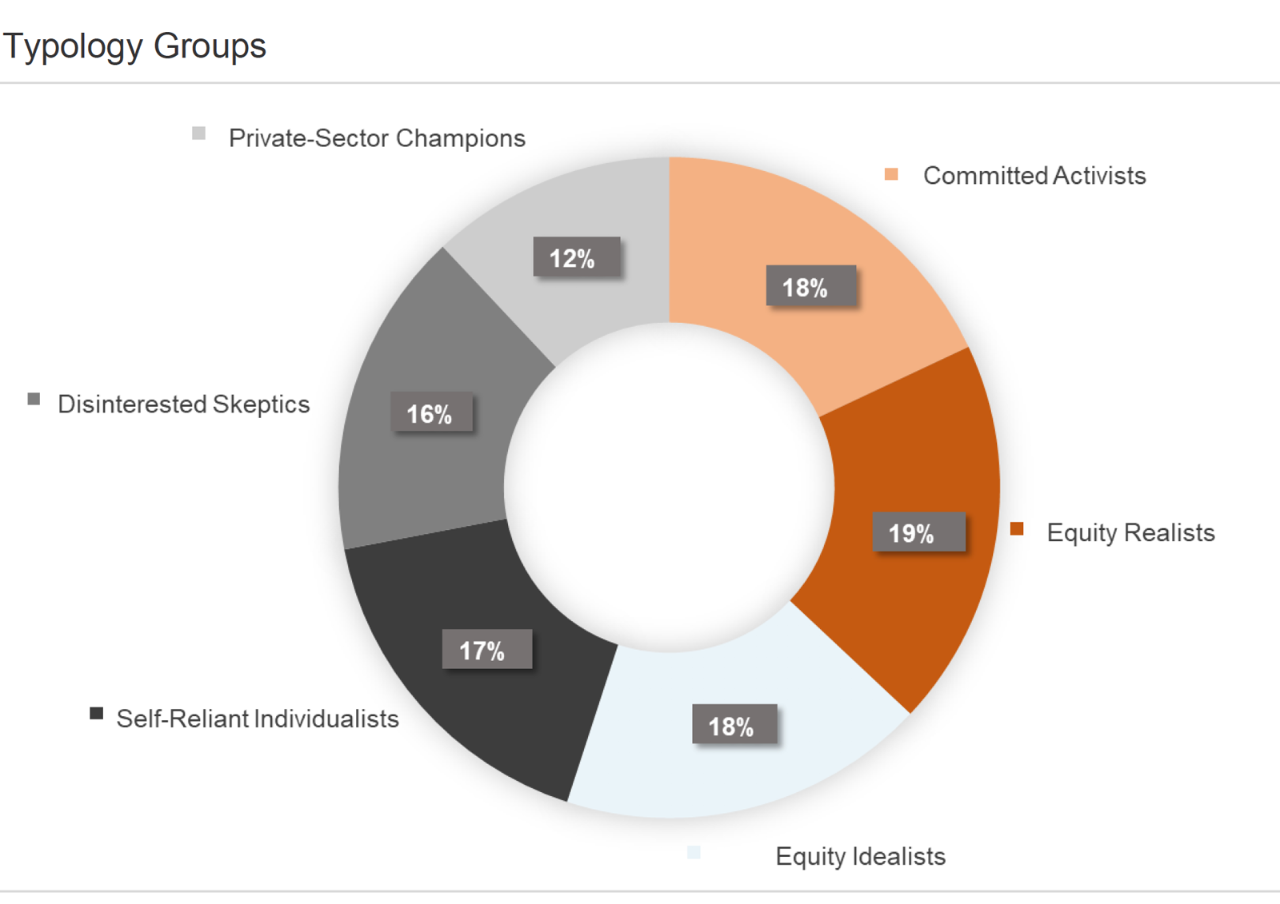 What follows is a breakdown of each group, the values they care about, their demographics, and other distinguishing characteristics.

This group, which makes up 18% of the survey sample, has views that are completely aligned with efforts to promote health and health equity in the United States.

In terms of demographics, Committed Activists are more likely to:

This group, which makes up 19% of the survey sample, is also supportive of health equity promotional efforts, though not as much as Committed Activists.

In terms of demographics, Equity Realists are more likely to:

This group, which makes up 18% of the survey sample, is for the most part supportive of efforts to promote health equity in the U.S. with some caveats.

In terms of demographics, Equity Idealists are more likely to:

This group, which makes up 12% of the survey sample, has mixed and sometimes conflicting views about health and health equity.

In terms of demographics, Private-Sector Champions are more likely to:

This group, which makes up 16% of the survey sample, is broadly skeptical about health and health equity promotional efforts underway in the United States.

In terms of demographics, Disinterested Skeptics are more likely to:

Effective advocacy starts with understanding how audiences think about an issue. Download our communications guide to understand your audiences, identify channels for reaching them, and to craft messages that will be most effective.