As the pandemic forced women out of the workforce in record numbers, a new survey reveals that men overwhelmingly value care work and want to share it equally with their partners. But the lack of supportive workplace cultures and public policies prevent them from doing so. Where do we go from here? 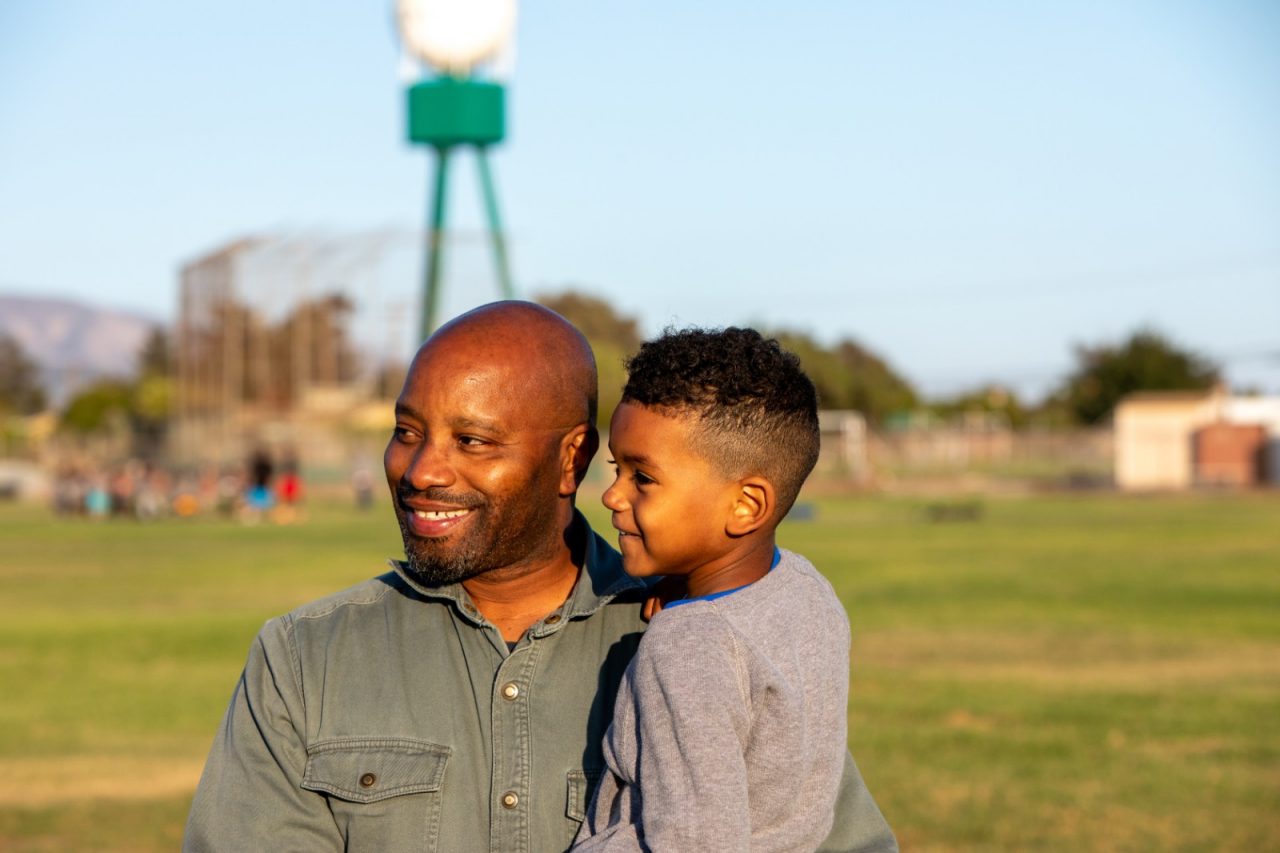 Jennifer Ng’andu, a managing director at the Robert Wood Johnson Foundation (RWJF) and Brigid Schulte, an award-winning journalist, author, and director of the Better Life Lab at New America, discuss key findings from the report series about the state of men and care work, including Providing Care Changes Men, So What Keeps So Many of Them from Having this Transformative Experience?

As pressure mounts to address the many challenges brought to the fore by the pandemic, our nation is experiencing a reckoning in caregiving, and what it means for families and our economy. A new nationally representative survey conducted by New America and funded by the Robert Wood Johnson Foundation, revealed that although our cultural norms have not caught up with our ideals of gender equity, men overwhelmingly value care work, and want not only to participate, but to share it equally with their partners. However, the lack of supportive workplace cultures and public policies keep them from doing so.

The pandemic has forced women out of the labor force in record numbers. Back in December, at the height of this trend in the labor market, 100% of job loss was attributed to women. According to Gallup, pandemic job losses show that an estimated 2.3 million women left the workforce, compared with about 1.8 million men. As our country begins to recover, and school and child care options become more predictable, experts say policymakers and business leaders must support women to help them once again make up nearly half of the labor force.

During the past year, many women have struggled to meet a drastic increase in responsibilities at home. This involved juggling the care of children, overseeing virtual schooling, caring for sick family members—all while continuing to work. Not only is this care uncompensated, but many workplaces don’t provide women with the flexibility—or schedule control—needed to balance it all. Many, particularly single mothers, had no choice other than to leave the workplace. Other women persisted, suffering increased stress, exhaustion, sleeplessness, and burnout. There is little public policy that supports for caregivers, resulting in these unfair and often impossible tradeoffs.

In the New America survey, we found that men agree it shouldn’t be this way. At the same time, many feel trapped by policies and cultural expectations that tie men to work, and women to care. In our focus groups, many men across race and ethnicity said that in order to be engaged in caregiving, feeling supported as caregivers at work, and being able to take paid caregiving leave, was critical. This helped them fulfill roles as the involved fathers, sons and caregivers that they aspired to be. It also helped their wives and partners combine work and care to live the kind of lives they hoped for, too. And yet this support—before and during the pandemic—is all too rare. The United States is the only advanced country that does not guarantee paid maternity leave, and is one of a handful that does not guarantee paid paternity leave. We are among the handful that do not guarantee paid sick or vacation days. We do not invest in universal childcare in the way that our peer nations do, nor give workers voice, say and autonomy over the time, manner and place of their work, as other countries with stronger trade unions or legislation that gives workers schedule control and flexibility.

These new findings show the ongoing need to counter the cultural narrative that caregiving is exclusively women’s work and advance equitable public policy solutions. Men are echoing this message.

Care work, both in family life and as a profession, is still viewed as “women’s work” and this outdated stereotype limits the potential of men as well as women. We spoke to men who are nurses, childcare workers, and home health aides. They are proud of their care work and find it challenging and fulfilling. Yet one in five reported feeling stigmatized as caregivers just because they’re men. Care professions, which are female-dominated and where women of color are overrepresented, are among the fastest growing as the population ages. Yet, unlike computer programming and data, another fast-growing, male-dominated industry, care work pays poverty wages and offers few benefits, if any. We need to elevate the value of these often invisible care jobs and make them good jobs for everyone.

We also found that, contrary to stereotypes, many caregiving men, particularly those who care for children or adults with special needs, perform many of the same “hands on” intensive, intimate care activities commonly associated with women, like bathing and dressing. About two-thirds of these caregiving men wind up needing to reduce work or drop out of the workforce, which is the same rate as women. Men with these more intensive caregiving responsibilities are also experiencing far greater work-family conflict, stress, and burnout, than are fathers of children with no special needs, or men with no caregiving responsibilities.

Traditional gender norms are powerful at work and at home. Women are still expected to serve as primary caregivers for family members—from infants to elderly family members. These outdated views harm men, women, children and entire families. They prevent women from advancing professionally, create stress, and overwhelm relationships and compromise personal wellbeing. As the pandemic has vividly revealed—with women taking on the bulk of caregiving and homeschooling—these views prevent men from being the active and engaged caregivers that our research affirmed they want to be.

We found that an overwhelming majority of men say that care work at home is as valuable as paid work, (more than 80 percent) and that men and women should share it equally (90 percent.) Yet, we found that it rarely works out that way. And that men and women have very different ideas about what sharing care equally means. Among adults over 18, four in 10 said that, when a family member needs care, the responsibility falls primarily on women. Men also tend to think they do more and share care equally—62 percent. Only 33 percent of women agreed. Rather, nearly two-thirds of the women surveyed said care duties fall to them, compared to 25 percent of men who thought women bore the brunt of care.

We also explored stereotypes about race and found evidence showing the strong role Black men play as fathers and caregivers, and how Black fathers face particularly difficult barriers to engaging in care.

There has long been a false cultural narrative about Black fathers, even though data suggest they are among the most active parents of any racial or ethnic group. What we found reinforces this fact pattern: there are no differences in the contributions of fathers or attitudes toward care based on race or ethnicity.

Our survey also found that more Black fathers than White fathers believe it's important for them to feed, dress, and provide care to younger children. We also found that Black fathers and caregiving men often face higher barriers to giving care, due to structural racism, discrimination at work, and the mass incarceration system.

This is where structural racism is again relevant. As we mentioned before, the United States does not have a national public paid family and medical leave policy. Only a handful of states mandate this benefit and companies voluntarily only cover about 20 percent of the workforce, mostly in white collar and large companies. We found that a similar percentage of Black and White fathers used savings to cover the costs associated with their recent leaves—paid or unpaid. However, twice as many Black fathers (30 percent) as White fathers (15 percent) used savings they had specifically set aside for health needs to fund their time off from work. This reveals real barriers to care that disproportionately burden Black fathers.

This research was built on exploring the perspectives and experiences of a wide variety of caregivers. The research team was very much steeped in the issues of gender equity, roles, and balance. And yet, many of us were surprised by what we heard from the survey respondents. It just goes to show that this area of social science is a rich one, with lots of stones still left unturned.

The attitudes and norms of breadwinner-homemaker families that were mainstream a generation ago clearly do not apply today, and by extension, many of the assumptions and expectations leaders use to inform decisions and design policies are often built upon a faulty foundation of stereotypes—ones that never really rang true for many in the U.S. in the first place. Having an accurate picture of how gender shapes care and caregiving at home and in the care economy, and understanding the motivations, goals, and barriers experienced by those who are engaged in these roles, are essential building blocks to creating the necessary new policies, workplace practices and cultural norms that will lead to a stronger, healthier and more equitable future.

Learn more about how men view their caregiving experiences and explore the many benefits of supporting male caregivers.

Brigid Schulte is the director of the Better Life Lab, the work-family justice program at New America, a nonpartisan think tank, that uses narrative to move public policy, workplace practice and culture so that people of all genders and racial and ethnic identities can thrive, with decent, dignified work and time for care and connection across the arc of their lives.

Jennifer Ng’andu, managing director–Program at RWJF, helps lead grantmaking activities to advance social and environmental changes that help ensure that all children and their families have the full range of opportunities to lead healthy lives, while providing a strong and stable start for every child in the nation.