Strong partnerships spanning an array of sectors—including public health, housing, education, transportation and others—are the bedrocks of healthy communities. How do they evolve and what makes them successful? 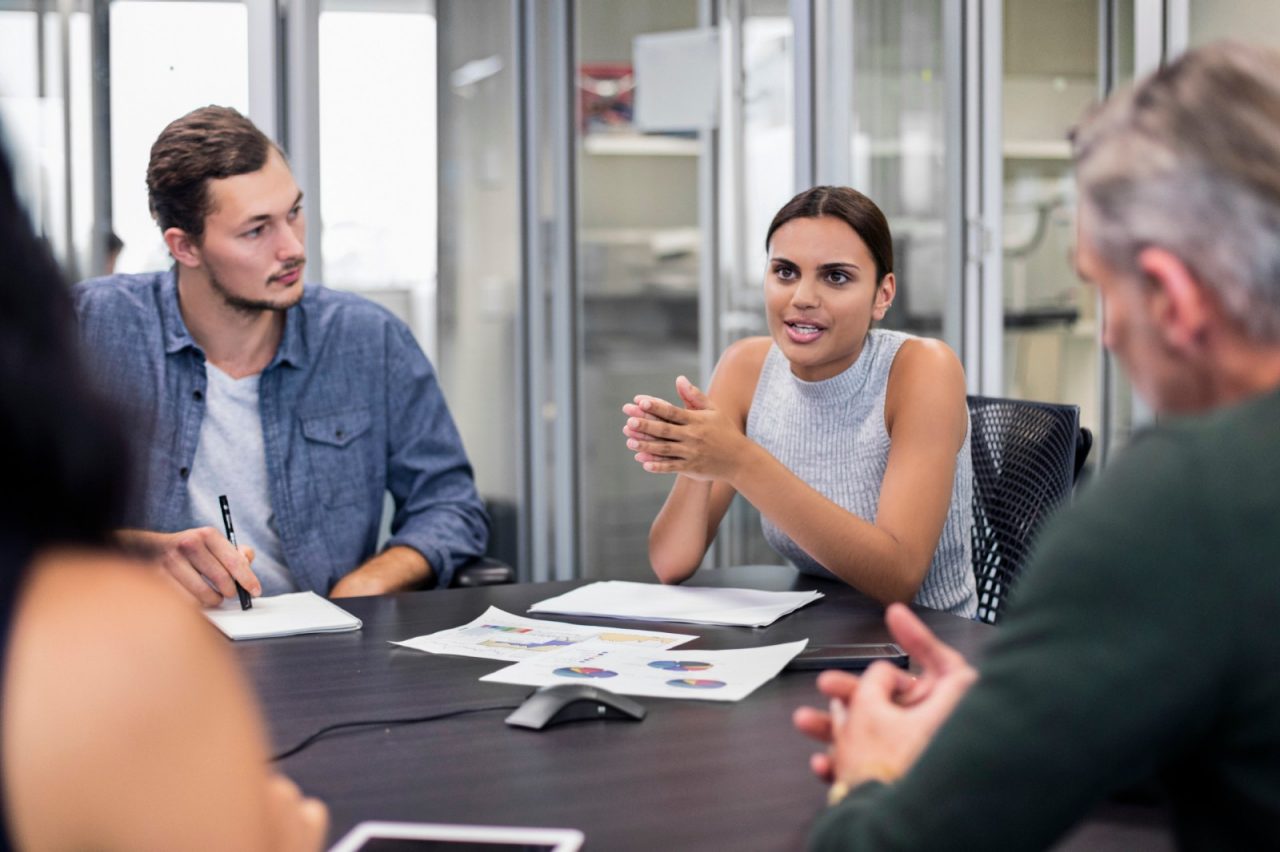 When Mercer Medical Center in Trenton, New Jersey, planned to close its doors more than 10 years ago, many in the community were alarmed by the likely impact on health services available to the city’s large, low-income population. Encouraged by Mayor Douglas Palmer and the State Department of Health, two hospitals, a federally-qualified health center, and the city health department came together to consider how best to meet the needs of Trenton residents.

At the time, many of these providers knew one another more as competitors than as collaborators. But they recognized a shared commitment to Trenton’s most vulnerable residents and set aside potential rivalries to form the Trenton Health Team. Today, that team links more than 60 behavioral, social service, educational, and faith-based organizations to pursue better community health outcomes.

Such partnerships are springing up across the nation, bringing new people and their diverse experiences to the table. Representatives of health systems, insurance companies, health departments, and patient groups are now seated together. As important, they are joined by sectors that haven’t traditionally considered health to be part of their mission, like community development, education, environment, transportation, business, housing, and law.

No one has the ability to transform health in the United States by working alone. Coming together and thinking about systems, not just individual projects, are key to creating healthier communities. As partnerships become more common, it’s important to understand how they develop over time, and what it takes for them to work.

How Do Partnerships Evolve?

Pulse Check on Multi-Sector Partnerships found out. This report by ReThink Health, a Rippel Foundation initiative, is a snapshot of what health-focused partnerships look like, and how they evolve, based on 237 survey responses from 42 states, plus Washington, D.C., and the Virgin Islands.

The survey found that most partnerships are relatively new, with two-thirds of them launched since 2010. Their reach is broad, extending across regions where one-third of the U.S. population dwells. And they are diverse—half of the surveyed coalitions include representatives from at least ten different sectors, including public health, government, social services, health care, and community planning and transportation. Some partnerships focus on a single area (such as clinical care, health behavior, socioeconomic factors, or the physical environment), while others tackle projects that include two or more of those categories (such as promoting tobacco cessation and reducing exposure to local environmental hazards).

Partnerships have distinct phases, according to the Pulse Check analysis, each with their own challenges and strategic opportunities. By describing these phases, and the common pitfalls and momentum-builders that often accompany each one, the report helps partnerships know what to expect as they develop over time, and how to prepare. 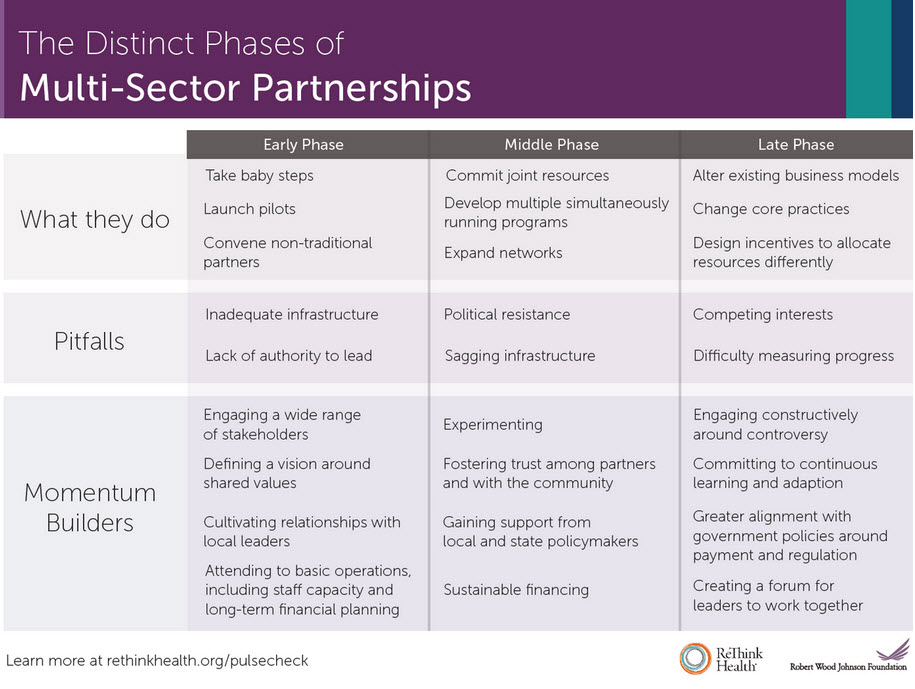 A Partnership in Action

One middle-phase partnership that responded to the survey was the ECOS Partnership in Chittenden County, Vermont. It formed in 2012 to implement a comprehensive region-wide plan designed to meet the goal of creating a “healthy, inclusive and prosperous county.” Five years later, 19 municipalities and some 40 non-profit institutions and government agencies are firing on all cylinders to drive that broad agenda forward. The ECOS Partnership tracks more than 90 wellness indicators in education, health, housing, transportation, employment, and other sectors. Currently it’s campaigning to increase local rental and owner-occupied housing to address the opioid crisis.

Like other middle-phase partnerships, ECOS noted that facing and discussing tough issues helped their partnership build momentum. The links forged between two ECOS partners, the University of Vermont Medical Center and the Champlain Housing Trust, illustrate the potential. In 2013, the Medical Center acknowledged that a shortage of affordable housing was hurting its ability to safely discharge homeless patients—but didn’t see a clear role for the Medical Center in addressing the problem. Three years later, it had agreed to purchase “bed nights” in a motel run by the Housing Trust and to provide other housing supports, and was realizing significant health care savings as a result. Only painstaking relationship-building made it possible to move closer to the goal of improving community health while controlling costs.

No two community health partnerships will look the same, of course, since local context significantly influences their structure and agenda. But Pulse Check’s insights about pitfalls and momentum builders, and its finding that partnerships at any phase do best when they see themselves as part of a larger system, are valuable touchstones. The report’s recommendations can also inform funders, policymakers, and other allies helping to build the capacity of these partnerships. At RWJF, we’re working to apply these lessons to our own efforts to foster and support cross-sector collaboration.

Read Progress Along the Pathway for Transforming Regional Health: A Pulse Check on Multi-Sector Partnerships.Learn more about ReThink Health Ventures, which is working with six partnerships in the later phase of development to discover what it really takes to transform regional health systems. 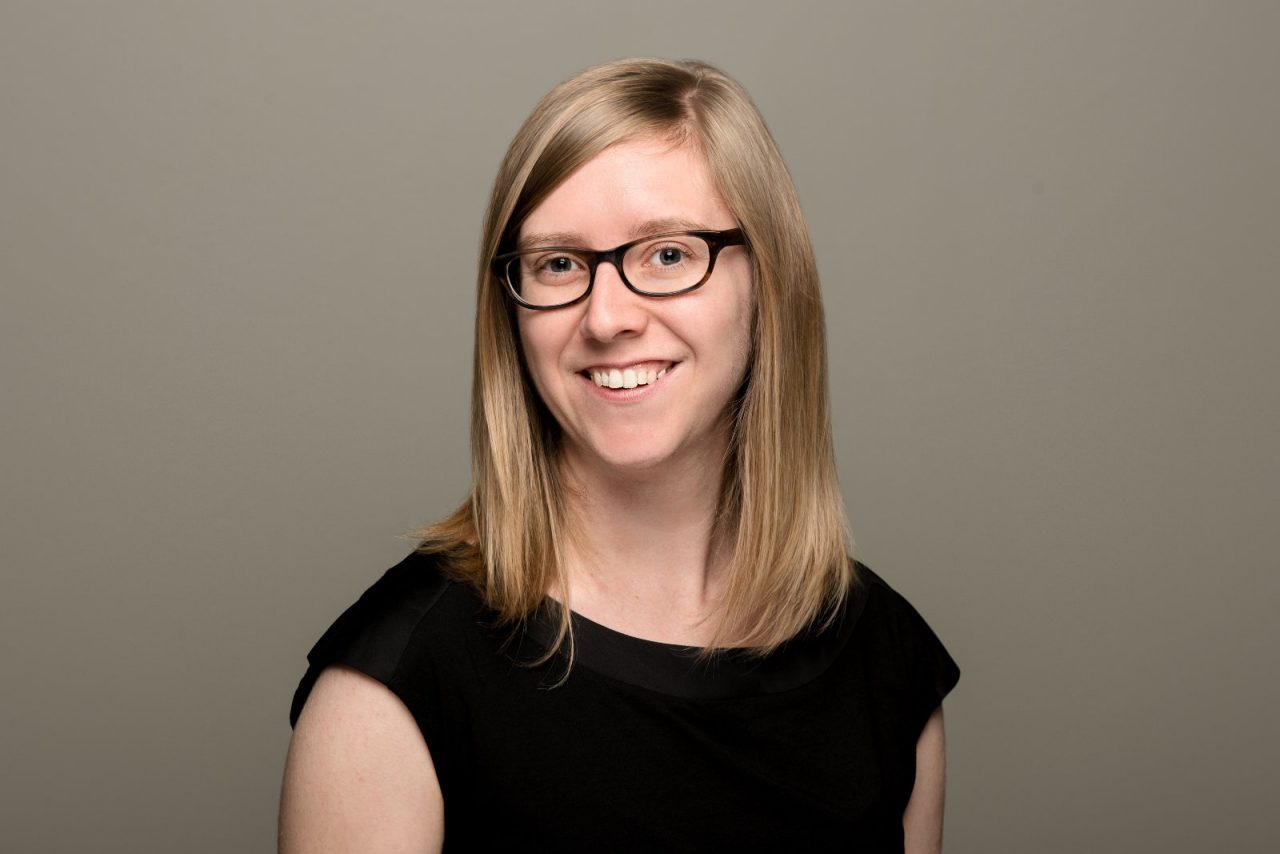 Emmy Ganos works on the Foundation's efforts to advance a Culture of Health where our economy is less burdened by excessive and unwarranted health care spending, and where the health of the population guides public and private decision making.