How a Native American Tribe Found Healing Through Horses

Bring horses and Native youth together, and connections are built that can change lives. 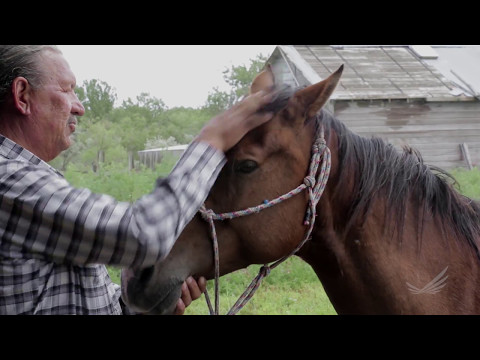 Editor’s note: Shortly after this video was published five years ago, Charlie Four Bear—the Native elder featured—passed away. His teachings about how to build resilience, however, continue to endure.

Deep ties to the land and close connections with animals have long helped to define Native American culture and make their way of life possible. In Fort Peck, Montana, Charlie Four Bear reclaimed that legacy by helping young people develop enduring relationships with horses. Four Bear (Dakota and Lakota) was an elder on the Fort Peck Indian reservation and a former police officer.

“First they took away our land,” he said, describing the destruction that occurred as White settlers pushed West. “And then they took away our buffalo. And then they took our horses away.” The theft of so much Native culture, and the inequitable distribution of resources and opportunity that continues to this day, have damaged lives and undermined communities. The scars are apparent in the substance use and loss of hope revealed in one horrifying statistic: in a single year, 28 of 223 students at the local high school attempted suicide.

The Youth Mentor Equine Program that Four Bear ran at the time was one way that tribal leaders honored Native traditions while rekindling a sense of identity. It was one example of how community-power building can overcome the systemic harms that undermine health.

Horses had always been in Four Bear’s life—“part of our family in every aspect of the word,” he said in a video describing his work, and it is that connection that has been shared with young people. Climbing on a horse for the first time is frightening, he acknowledged. “There is a thousand pounds of bone and hoof ready to step on you.”

But that fear quickly gives way to a sense of belonging, recalls a young Native boy named Jay, who came to feel very much at ease with the animal. “It felt pretty cool. It felt cool to connect to the horse in every single way you possibly can.” When circumstances separated Jay from his horse for a few months, he recalled that “everything started going back to the way it was,” a downward spiral that landed him in juvenile detention. He jumped at the offer to get back to the horses.

The sense of hope Jay found among the animals is perhaps a harbinger of things to come. “It is foretold by ancestors that the seventh generation is one that is going to come and be in that time period where things are going to change to benefit the Native American getting back to who we say we are as Natives,” says Kenny Smoker, Jr. (Assiniboine & Sioux), who coordinates the Fort Peck Tribe’s wellness program. He believes that the tribal elders will point the way. “They provide wisdom for our tribe. We really need to tap into that to help address the suicide and the other health disparities that exist.”

Four Bear, too, saw the possibility. “We can help each other and become a healthy tribe again,” he declared in his soft-spoken, determined manner.

Four Bear’s story inspired a powerful work of fiction by author David A. Robertson. Read “Reclamation” in RWJF’s short-story collection, Take Us to a Better Place.