Irma’s troubled life culminated in being thrown down the stairs when she was six months pregnant. Thanks to a program that’s addressing system-wide change, Irma and her family are now safe and secure with a new home and a brighter future.

Editor’s Note: Although foster care placement is sometimes necessary to ensure the safety and well-being of children, research indicates that keeping families together is generally better for children, parents, and the community. Working with the Corporation for Supportive Housing (CSH), the Robert Wood Johnson Foundation (RWJF) launched the Keeping Families Together (KFT) pilot in 2007 to explore whether supportive housing can help vulnerable families grow stronger, safer and healthier so that children—and their parents—may thrive. With the release of new findings from a federal demonstration project inspired by KFT, we are resurfacing this post.

From too early an age, Irma faced a seemingly endless series of traumatic events that life threw at her as best she could—on her own.

But after a domestic crisis left her hospitalized, homeless, jobless, and in danger of losing her infant son, Irma finally received help from a supportive housing program that changed her life.

Keeping Families Together—the RWJF-supported model for the program that helped Irma turn her life around—has become my own personal touchstone for what building a Culture of Health should look like in the real world.

Irma’s story illustrates both the power of this model and the inner resilience that so many struggling families possess.

Irma was only 9 years old when she ran away to escape an abusive stepfather. Ultimately, she also fled a string of foster homes, and even lived on the streets of Hartford for a while when she was 12.

Eventually Irma became a single mother, sleeping in a car at night with her baby so she could drive to her job during the day and save enough money for an apartment.

Later, Irma became involved with a man who fathered three of her four children. Over time, he became physically and emotionally abusive toward her. But because she relied on him to watch her young children while she worked double shifts to support her family, Irma couldn’t afford to leave him.

She was six months pregnant with her fourth child when he pushed her down a flight of stairs. The violent act sent Irma into early labor, and her son Julio was born prematurely, with dire health problems, including a collapsed lung and an unusually dangerous form of sleep apnea. He spent the first six months of his life in the hospital; Irma was hospitalized for three months. During that time, she lost her job and her home.

A friend cared for Irma’s three older children while she recovered in the hospital, but child welfare services wanted to remove Julio because Irma no longer had the means to care for him.

And Irma admits: She had nothing.

Fortunately, while in the hospital, a case manager from Connecticut’s Intensive Supportive Housing for Families (ISHF) program visited Irma. The case manager, Melissa, invited Irma to apply for assistance. Although wary of the offer, Irma accepted. 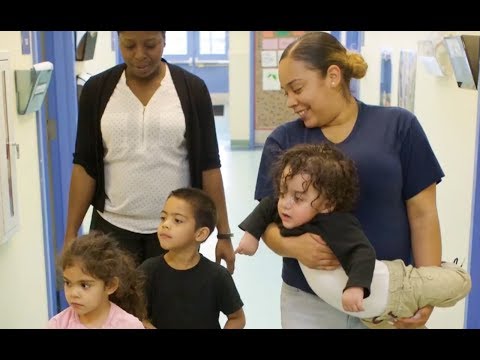 Through ISHF, Irma qualified for a permanent subsidized housing voucher. Melissa not only got Irma into a new home, but helped her furnish it and obtain the equipment and supplies she needed to care for Julio.

Today, Irma and her children are safe and strong, together. Irma’s mother helps care for her oldest son. Meanwhile, Irma has started a job as a certified nursing assistant and is taking classes for an associate’s degree. She wants to pay it forward: She hopes eventually to have a job helping troubled kids, and to one day give up her housing voucher so that another family may benefit.

Supportive Housing As a Platform for Serving Families

ISHF is part of a federal demonstration that grew out of KFT, a small but highly successful pilot program in New York. Over three years, with funding from RWJF, the KFT pilot explored whether permanent, subsidized housing with wrap-around case management services for families in crisis could stabilize those families so that they could stay together, safely, instead of losing their children to the child welfare system.

RWJF President and CEO Rich Besser discusses how housing is linked to health and equity in America. Read the 2019 Annual Message

KFT is a radically different approach to families in crisis—one that both recognizes the complexity and multiplicity of challenges that so many families face and completely restructures the system for helping them, putting families at the center.

To me, it also embodies a Culture of Health in action: addressing system-wide change equitably to create opportunities for vulnerable families to live healthier lives, starting with a safe and secure home.

Although KFT recognizes the primacy of protecting children from harm, it seeks to preserve families and ensure they have access to the resources they need to remain stable and be successful. Few experiences are more traumatic for children then being removed from their families, and kids who grow up in the foster care system are at high risk for heartbreaking outcomes, including substance abuse, violence, mental illness, homelessness, teen pregnancy, suicide, and early death.

And for parents like Irma who grew up in foster care themselves, that’s the last thing they want for their children.

KFT also acknowledges each family’s unique situation and the need to customize services accordingly. Instead of focusing on what families lack and where they may fall short, the KFT model focuses on bolstering their strengths to create safe and stable environments for families and their children. It uses a team approach, bringing together resources and supports from child welfare, public housing, mental health, child development, vocational services, and other sectors to address not only the children in the family but the family as a whole.

Irma’s case manager, Melissa, recognized that Irma was a good mother who loved her children, and a hard worker. She saw that Julio didn’t need to be taken from his mother to be safe and protected. But his mother needed support.

A New Start on Life

Due to her difficult path, Irma hadn’t ever envisioned a bright future for herself. “I never thought I would finish high school, or be in college,” she says. “I always thought I would be a regular mom, just struggling...I never had faith or hope.”

But supportive housing has helped her find her own strength. “Now I have faith and hope, because I’ve shown that I can do it.”

The federal demonstration found that supportive housing overwhelmingly improves housing outcomes for families while reducing the number of children removed from their families and increasing the number of family reunifications. It helps struggling families break the cycle of homelessness and achieve greater stability, but it does not solve all the challenges of being poor. Five sites—the state of Connecticut; Broward County, Fla.; Cedar Rapids, Iowa; Memphis, Tenn.; and San Francisco, participated in the demonstration.

The KFT approach is catching on, and the demonstration findings will likely help to advance it. In addition to the five demonstration sites, New Jersey and New Mexico have used the results of the pilot program to design similar programs. California has launched a $10 million KFT-inspired program and evaluation.

No child should have to grow up traumatized and abused, forced to fend for herself in a system that doesn’t recognize her strengths.

As we continue to build a Culture of Health, where everyone—no matter what their circumstances are—has a fair and just opportunity to live a healthy and productive life, let’s remember the power of system-transforming programs like KFT and how we can use that power to help families change their lives for the better.

Learn more about Keeping Families Together and how it’s bringing together housing providers and child welfare agencies to strengthen society’s most vulnerable families and protect our children.

Kerry Anne McGeary, an award-winning professor and researcher, is a nationally-recognized economist whose extensive research has focused on economic policy, health economics, and health services. Read her full bio.