Why Every Street Should Be an Open Street

How can streets get people moving and improve health? When they are open, with room for people of all ages to bike, walk, play, and build community. 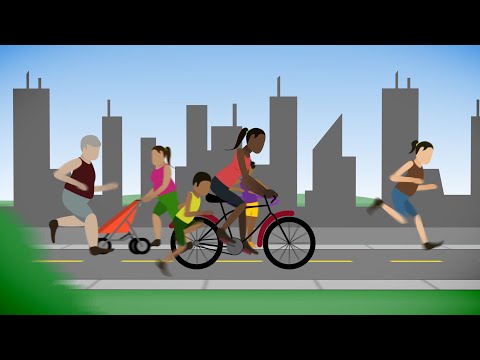 Every street should be an open street—open to people with and without wheels, all abilities, all ages, all people. Streets belong to everyone. They connect us to each other and the places where we live, learn, work, and play—across neighborhoods, cultures, and economic status.

Streets are the vascular system of our cities and regions. They let us explore and experience our communities and all that they have to offer.

Most of the time, however, they are overrun by cars. At peak hours, traffic clogs the main arteries, automobile fumes foul the air, and blaring horns assault the eardrums.

What if one day a week we all left our cars at home and took to the streets on our own two feet? What would happen?

Thousands of people having a ball together—cycling, strolling, mingling, jogging, roller-skating, dancing, and filling the streets with their energy and spirit.

Sounds great, right? It is great!

I know, because on a recent Sunday afternoon I took part in Atlanta Streets Alive, which closed off nearly five miles of city streets to automobiles and opened them up for residents and visitors to enjoy.

A wistful part of the Atlanta program includes a parade led off by bicycles with giant paper-and-wire phoenixes in different colors representing the city’s neighborhoods. People came with their kids and their dogs, passing through vibrant neighborhoods as they took Zumba classes, patronized local restaurants and stores, tried out a huge climbing wall and walked through a petting zoo.

The Streets Alive Program, an exciting adaptation of a program that begun in Bogota, Colombia, in the 1960s, illustrates American cities’ eagerness to learn what’s working – whether inside or outside our borders – that can help people live the healthiest lives they can. My colleagues and I at the Robert Wood Johnson Foundation see efforts to learn from promising approaches around the globe, like this one, as a critical part of building a Culture of Health here at home.

Today, RWJF is working with Gil Penalosa, the former parks commissioner in Bogota, and the organization he founded, 8 80 Cities, to bring Healthiest Practice Open Streetsprograms to cities across the United States—from Los Angeles to Brownsville, TX, to Akron, OH, to New Brunswick, NJ. In addition, our Network of Champions, which includes leaders from organizations such as AARP, the National Parks and Recreation Association, and the National League of Cities, is working with a number of cities to launch Healthiest Practice Open Streets programs.

We love Open Streets because they bring together people of all ages, abilities, and backgrounds and encourage them to be physically active in a fun way. By participating in Open Streets programs regularly, people can begin to experience their city in a new way and collectively build a culture of health.

In Atlanta, Streets Alive has proved so popular that the city and its partners are working to increase the frequency and coverage of the program— adding many more miles of open streets. That’s exactly what we want to see: more miles, more people being active, and more connections.

We hope that more cities will recognize the benefits of Open Streets—to public health, community spirit, and local business—and start their own programs.

Want to open streets where you live? Check out this toolkit from 8 80 Cities.

Sharon Roerty is a Senior Program Officer at the Robert Wood Johnson Foundation with extensive work on transportation, environmental and urban policy. At RWJF she focuses on the built environment, policy, engagement and implementation. Read her full bio.