We're breaking down barriers to health equity in our home state of New Jersey by encouraging collaboration across sectors and communities.

New Jersey is ranked as one of the nation’s healthiest states—on average. But if you were to look more closely, you’d see the numbers mask significant differences in health across the state. For instance life expectancy in one Newark census tract is 75.6 years while just a few miles outside the city, it’s 87.7 years.

Race is a big factor contributing to this and other health disparities. For example, babies born into Black families in New Jersey are twice as likely to die before their first birthday in contrast to those born into white families.

Other factors contributing to health disparities include income, gender, and education. Some are less apparent, like the distance from people’s homes to parks and grocery stores or the availability of public transit. The point is that many things beyond what might immediately be thought of as health related do, in fact, play a major role in determining health.

Atlantic City, New Jersey, is a colorful place with a storied past. Today, its casinos, beaches and boardwalk make it a natural tourist destination, with a transportation infrastructure that puts it within easy reach of millions of people. The many languages spoken in the city are a testament to its vibrant diversity.

Despite its long-standing status as a tourist destination, the city has not always enjoyed a stellar reputation. Crime rates exceed national averages (although they’ve fallen over the past few years), and unemployment is nearly double the national rate. Gambling hasn’t brought much luck to a place that sits in a county ranked 17th in health outcomes among New Jersey’s 21 counties, according to 2017 County Health Rankings data.

Over a million New Jerseyans don’t know where their next meal will come from. A nonprofit farm seeks to change that by working with schools, advocacy groups, distributors and more to bring over a million pounds of fresh produce to low-income communities while educating future generations about healthy eating.

Fourteen-year-old Destiny remembers the spring day when she and a bunch of other kids planted rows of string bean seeds in the dark, loamy earth.

“There was nothing there,” she says, pointing at the dense green plants whose abundant leaves now shelter countless sweet, crunchy pods.

Today, Destiny has returned—this time with a couple dozen other children—to harvest the beans and bring them home for dinner. Later, the children will add freshly picked nectarines, cucumbers, and green peppers to their goodie bags. They’ll also take home recipes for preparing those foods.

It’s one in a series of Kids Farm Days at America’s Grow-a-Row, a nonprofit farm in Pittstown, Hunterdon County, N.J., that provides fresh produce to people in underserved communities, as well as hands-on education to kids about healthy eating.

Strong partnerships spanning an array of sectors—including public health, housing, education, transportation and others—are the bedrocks of healthy communities. How do they evolve and what makes them successful?

When Mercer Medical Center in Trenton, New Jersey, planned to close its doors more than 10 years ago, many in the community were alarmed by the likely impact on health services available to the city’s large, low-income population. Encouraged by Mayor Douglas Palmer and the State Department of Health, two hospitals, a federally-qualified health center, and the city health department came together to consider how best to meet the needs of Trenton residents.

At the time, many of these providers knew one another more as competitors than as collaborators. But they recognized a shared commitment to Trenton’s most vulnerable residents and set aside potential rivalries to form the Trenton Health Team. Today, that team links more than 60 behavioral, social service, educational, and faith-based organizations to pursue better community health outcomes.

How Nurses Are Caring for Their Communities

Let’s recognize nurses for the roles they play within and beyond the health care setting.

I was a visiting nurse early in my career, working outside the bricks and mortar of our health care system to provide care directly in patients’ homes. I saw firsthand the important role that the home and neighborhood environment plays in shaping health. I’m no longer a visiting nurse who sees patients, but I’m still a nurse who is building a Culture of Health—through my work here at the Robert Wood Johnson Foundation and out in the community.

I recently volunteered with Habitat for Humanity in Trenton, where my colleagues and I helped build affordable homes for people in need of them. The tasks assigned to me didn’t require any nursing-specific skills, but many of the same qualities nurses bring to the job every day—teamwork, empathy, the ability to multi-task, and understanding how the conditions we live in affect our physical and mental well-being—made me feel comfortable (and even somewhat competent) on a construction site

New Jersey Health Initiatives is driven by five key principles for building empowered, equitable and healthier communities and narrowing the gaps in life expectancy across the state.

It’s a dismaying fact that we’re all familiar with: where you live has an enormous impact on your life expectancy. Indeed, some researchers now quip that your ZIP code may matter just as much, if not more, than your genetic code when it comes to your health. As one journalistic account put it, it’s “Death by Zip Code.”

New Jersey is no different. This summer, the Robert Wood Johnson Foundation (RWJF), together with Virginia Commonwealth University, published analyses of Mercer County, a prime place to showcase the impact of geography on health. It’s home to both affluent Princeton and economically strapped Trenton. And perhaps not surprisingly, life expectancy reflects the gulf in resources between the two towns. While a person born in Princeton can expect to live 87 years, his or her neighbor in Trenton has a life expectancy of 73 years—a staggering 14 year age gap across only a dozen miles.

These results are sobering. It’s easy to get despondent over them and locked into a narrative of failure and decline. But RWJF’s Culture of Health efforts involve cultivating potential, even in places where we wouldn’t normally think to find it. That’s where New Jersey Health Initiatives’ (NJHI) work comes in.

Urban planning plays a role in addressing health challenges in America and can help give everyone the opportunity to live their healthiest lives possible.

More perhaps than any place in the world, the New York metropolitan region is known for its urban form—its physical layout and design. From the Manhattan skyline to the neon lights and tourist-packed streets of Times Square to the rolling hills and winding paths of Central Park, New York’s built and natural environment is part of what makes it such a vibrant, dynamic place to live. The distinctive form also has important health impacts. But, as discussed in a new report, State of the Region’s Health: How the New York Metropolitan Region’s Urban Systems Influence Health, these impacts are often poorly understood.

The report, written by the Regional Plan Association (RPA) with support from RWJF, provides an in-depth look at health in the New York metropolitan region, where 23 million people live in cities, suburbs, villages and rural communities stretching from New Haven, Connecticut to Ocean County, New Jersey. It finds that New York region residents live longer than U.S. residents overall, but they are not necessarily healthier.

A new recommendation for pediatricians aims to help the one in five children in the United States who live in poverty.

During most of the week, I spend my time here at RWJF working on programs to develop leaders in health and health care and to address childhood obesity. But on Friday afternoons, I am at Eric B. Chandler Health Center in New Brunswick, N.J., seeing children and families. Eric B. Chandler is a federally qualified health center, and we serve a lot of poor, immigrant families. The children I see are more likely to have asthma or tooth decay than are children who live not too far away. They’re also more likely to be overweight, and to face adverse childhood experiences like family trauma or violence.

In some sense, this isn’t surprising. Poverty is one of the biggest health risks that children face today. One in five young people in the United States lives in poverty, and it’s present in urban, suburban, and rural communities across the country. My colleagues James Marks and Kristin Schubert recently described what lasting impact poverty can have on children.

Revitalizing Newark in a Healthy Way

An ambitious collaborative effort is revitalizing a long-struggling city in ways that promote not only economic growth, but health and wellness.

“Jobs in Newark, New Jersey are as rare as dinosaurs,” says Barbara LaCue. She should know—the 51-year-old Newark resident was unemployed for more than five years after being laid off in 2008 from a steady factory job. She ended up living in a homeless shelter with her two sons.

Then, last October that dinosaur showed up. It took the form of a 67,000 square foot ShopRite, the first full service supermarket to serve the 25,000 people in the city’s struggling University Heights neighborhood.

ShopRite took over a site that had been vacant since the infamous Newark Riots in 1967. It is in a neighborhood where the poverty rate ranges between 25 and 40 percent, and half the households do not have access to a car. ShopRite is the anchor tenant of Springfield Avenue Market, a planned $91 million dollar retail and housing development funded in part by The Reinvestment Fund, with support from the Robert Wood Johnson Foundation.

But to Barbara, what matters most are the 350 full and part-time jobs the store created, most of them filled by people from the community. She is a chef at the deli counter, and she sees the job as more than just a living—it is a creative outlet. Barbara makes a mac n’ cheese to die for, and there are few people who can claim to love their job as much as she does hers. “This store is the best. I love this store.”

Her colleague Donald Douglas, also a lifelong Newark resident, works in the produce section. No one in Newark wanted to hire people from the neighborhood before Shoprite came along, says Donald. “Now, this is my supermarket. We all greet people with a smile here, because we are part of the community.”

The New Jersey Institute for Food, Nutrition, and Health is impressive both in size as well as in its plans to help transform New Jersey into a national model for promoting healthier lifestyles for children and families. 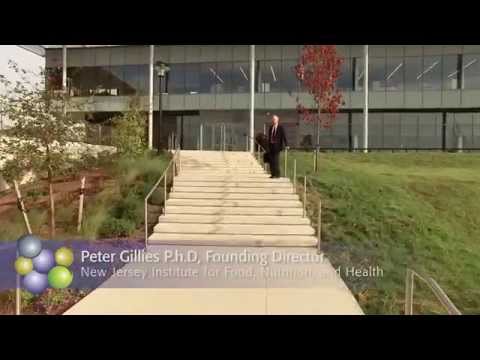 Last month, Rutgers University opened the doors to the New Jersey Institute for Food, Nutrition, and Health (IFNH), a new interdisciplinary research hub for scholars, policymakers, students, and parents to advance, educate and promote issues of nutrition and wellness. At the dedication ceremony, I couldn’t help but think of something the great Chicago architect Daniel Burnham once said:

It’s no surprise that an architect would come to mind as I sat proudly marveling in the atrium of our magnificent new home. The modern, open-concept building is a beautiful addition to the Rutgers campus, designed with nearly 70,000 square feet of research and community space dedicated to making New Jersey a healthier and happier state. It’s also a heartening testament to the support we enjoy from organizations like the Robert Wood Johnson Foundation (RWJF), which calls on all of us to work together to build a Culture of Health, where getting healthy and staying healthy are guiding values.