Watch the video of Casey Blumenthal, MHSA, RN, CAE, and Cynthia Gustafson, PhD, RN, discussing the work of the Cooperative to Advance Health through Nursing, a Montana effort to implement recommendations from the Institute of Medicine report, The Future of Nursing: Leading Change, Advancing Health. This video is part of a series released by The Future of Nursing: Campaign for Action, highlighting the goals and the ongoing work of some of its Action Coalitions—state-based collaborations that are helping advance these recommendations. 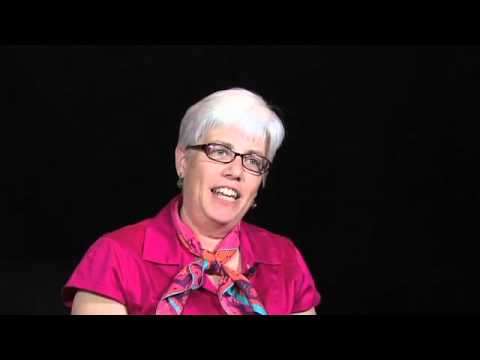 The Future of Nursing: Campaign for Action has released videos highlighting the goals and the ongoing work of some of its Action Coalitions—state-based collaborations that will help advance the recommendations of the Institute of Medicine’s Future of Nursing: Leading Change, Advancing Health report. Watch the video of Dale Allison, PhD, APRN, and Mark Forman, MPH, JD, discussing the work of the Hawaii Action Coalition, led by the Hawaii State Center for Nursing and the Hawaii Medical Service Association Foundation. 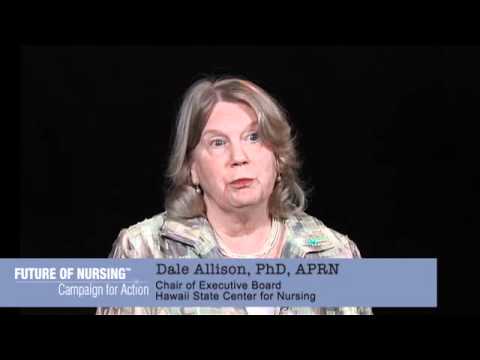 The Institute of Medicine’s Future of Nursing: Leading Change, Advancing Health report was released on October 5, 2010. The year since has seen significant progress as nurses and other health leaders around the country work to advance its vision for change. The Robert Wood Johnson Foundation (RWJF) recently announced 21 new state-based collaborations, called Action Coalitions, that will help advance the report’s recommendations. They join 15 Action Coalitions already in place, working in concert with the Future of Nursing: Campaign for Action to improve health care for all Americans by strengthening nurse leadership and the nursing workforce.

The Campaign for Action has released videos highlighting the goals and the ongoing work of some of these Action Coalitions. This blog will feature all of them in coming days. Watch the first video, which features a leader from Virginia discussing the imperative for change in her state and what the state Action Coalition is doing to implement the Future of Nursing report recommendations. 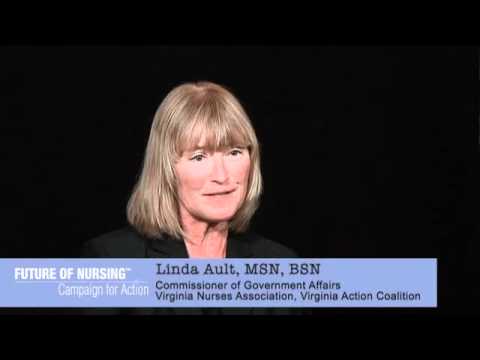 With matching funds provided through Partners Investing in Nursing’s Future (PIN), a collaboration between the Northwest Health Foundation and the Robert Wood Johnson Foundation (RWJF), the consortium was able to cross organizational and territorial lines to develop an innovative, community-wide Institute to provide leadership skill development for nurse managers from all sectors of health care: public health, hospitals, academic health centers, long-term care, and home health.

The Central Virginia Nurse Leadership Institute accepted its first class of fellows in the fall of 2007. The success of the program led to a five-year sustainability grant from the Richmond Memorial Health Foundation and expansion beyond central Virginia. Nurses from throughout Virginia are now eligible to apply for and attend the Nurse Leadership Institute of Virginia.

On April 27, 2011, Robert Wood Johnson Foundation Ladder to Leadership: Developing the Next Generation of Community Health Leaders program graduate (2009-10) Beth Albright Johns, M.P.H., assistant vice president for Early Childhood Initiatives and Education and the Success by 6 program at the United Way of Central Alabama, watched as much of her hometown was destroyed by tornadoes. While helping her friends, neighbors and colleagues in any way that she could, Johns also focused on her primary role, finding ways to protect the emotional health of the children affected by the tornado.

Beth Johns, fourth from left, and the rest of the Birmingham, Alabama Ladder to Leadership team.

On April 27, 2011, the largest outbreak of tornadoes in the history of our country hit the southeastern United States and my home state of Alabama. Living in my part of Alabama, I am used to severe weather, but the 27th felt different. The day started with a sense of foreboding, but given our weather history, worrying about it was out of character. In our community, a warning of severe weather generally means watching experienced meteorologist, James Spann, roll up his sleeves and get down to business to help us prepare. So that April day, we tuned in only to watch Spann struggle to maintain his composure as the tornado destroyed Tuscaloosa. I became more and more alarmed as I watched it devastate the communities of friends, colleagues and other neighborhoods where I work and tear through my hometown of Birmingham. Numbing disbelief set in as Spann said, “Oh my God, take cover…it’s out of control.”

The next day, April 28th, the community sprung into action. Our boardroom became the statewide 2-1-1 help line headquarters. Calls poured in from people asking for assistance or asking: “What can I do to help out?” Over 13,000 citizens registered through Hands On Birmingham and 2-1-1 to assist with the clean up and recovery. Pallets of clothes, water, generators and people from all over the country arrived to help. While trying to help others, my co-workers were also searching for loved ones and focusing on our job—protecting the mental health of children affected by the storms.

We immediately went to work with local agencies to advocate for mental health assessments for post-traumatic stress disorder among the kids.