Poll: Public Supports Substantial
Increase in Spending on U.S. Public Health Programs, but has Serious
Concerns About How the System Functions Now

Public trust in health care workers is higher during this time than trust in public health institutions, including the CDC, FDA, and NIH.

This poll, The Public’s Perspective on the United States Public Health System, was conducted February 11 to March 15, 2021, among a nationally representative, probability-based sample of 1,305 adults ages 18 or older. The margin of error at the 95% confidence interval is +/- 3.6 percentage points.

When it comes to trust, the public trusts health care workers more than U.S. public health institutions and agencies for recommendations made to improve health (see Table 1). This includes high public trust (percent saying “a great deal” or “quite a lot”) in nurses (71%), health care workers you know (70%), and doctors (67%) for recommendations they make to improve health. The public has lower levels of trust in the Centers for Disease Control and Prevention (CDC) (52%), state (41%) and local (41%) health departments, the National Institutes of Health (NIH) (37%), and the Food and Drug Administration (FDA) (37%).

At the same, only about one-third of adults (34%) adults gave positive ratings of the nation’s system for protecting the public from health threats and preventing illness, down from 43% in 2009. By contrast, public confidence in the nation’s medical system has increased during the Covid-19 pandemic, with about half of adults (51%) giving it a positive rating in 2020 compared with pre-pandemic measures in both 2009 (36%) and 2019 (36%).

“We appear to be entering a new era for public health, with widespread recognition of the critical importance of public health agencies and broad public support for substantially more funding. But success here requires increasing public trust in public health institutions and the perceived performance of these agencies,” said Robert J. Blendon, co-director of the survey and Richard L. Menschel Professor of Public Health and professor of Health Policy and political analysis emeritus at Harvard T.H. Chan School of Public Health.

“Our nation’s public health system entered the pandemic underfunded and understaffed—problems that have persisted for generations—and the consequences of this underinvestment over the past year have been devastating,” said Richard E. Besser, president and CEO of the Robert Wood Johnson Foundation and former acting director of the CDC. “It is heartening that strong majorities of the American public support more substantial public health funding, which will put us in a better position to prepare for and respond to future health emergencies. Public health must also use this moment to commit to addressing the systemic challenges to improved health and well-being—including structural racism and discrimination—that continue to consign too many people of color in this country to shorter, sicker lives.” 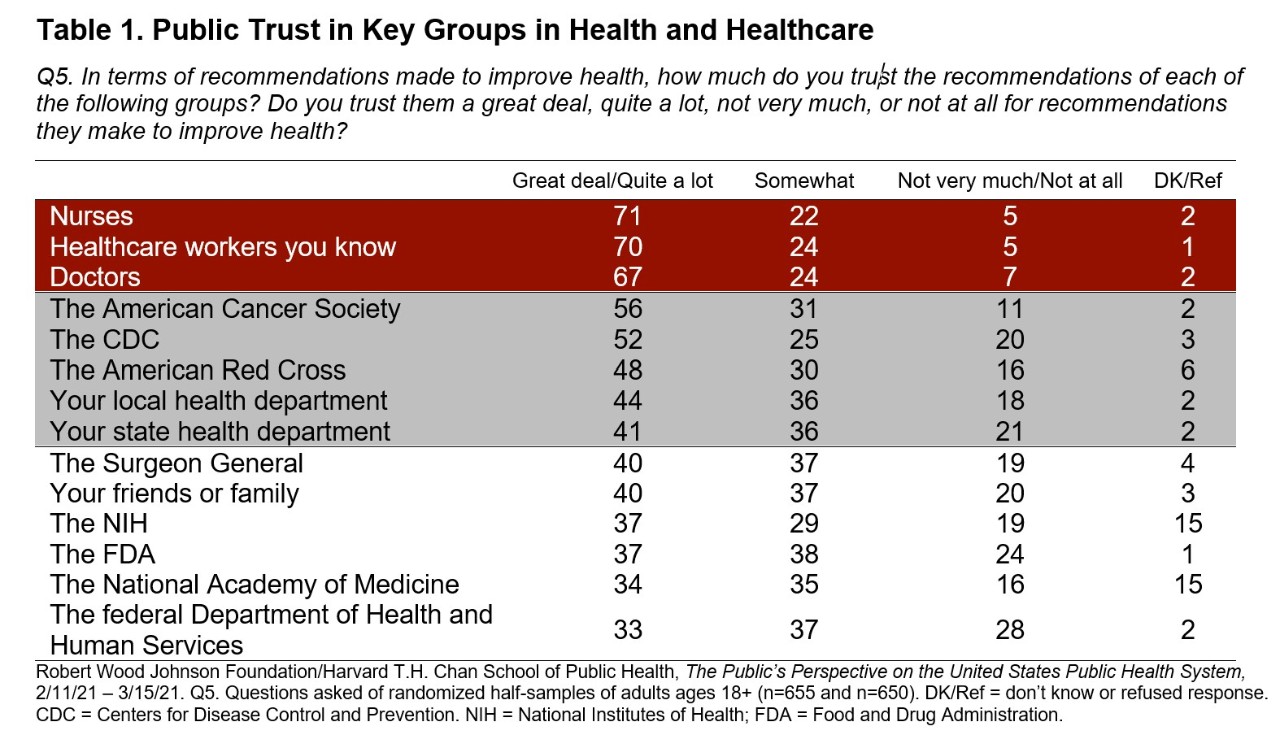 For more than 45 years the Robert Wood Johnson Foundation has worked to improve health and health care. We are working alongside others to build a national Culture of Health that provides everyone in America a fair and just opportunity for health and wellbeing. For more information, visit www.rwjf.org. Follow the Foundation on Twitter at www.rwjf.org/twitter or on Facebook at www.rwjf.org/facebook.