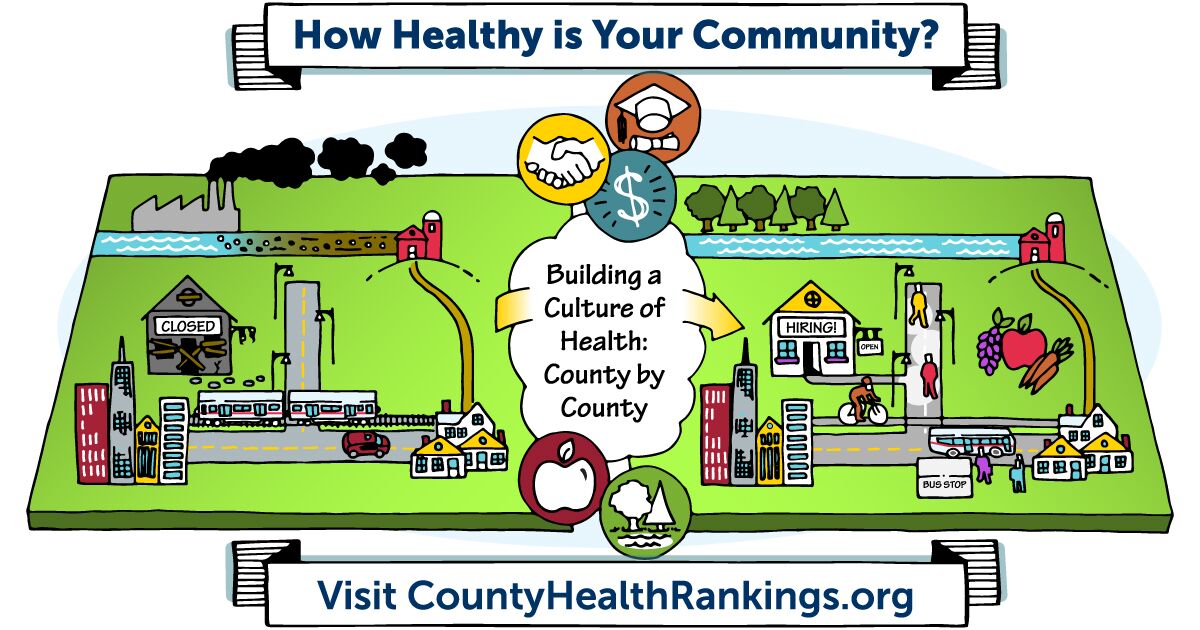 Princeton, N.J. and Madison, Wis.—The 2016 County Health Rankings released today compare health differences on a broad range of measures among almost every county throughout the country. The report shows dramatic differences between rural and urban counties on a number of measures, most notably premature death rates. Rural counties not only have higher rates of premature death, but also nearly 1 in 5 rural counties saw rises in premature death rates over the past decade while most large urban counties experienced consistent improvement.

The County Health Rankings, a collaboration between the Robert Wood Johnson Foundation (RWJF) and the University of Wisconsin Population Health Institute (UWPHI), compare counties within each state on more than 30 factors that impact health, including such social determinants as education, jobs, housing, exercise, commuting times and more. Over the past seven years the Rankings, available at www.countyhealthrankings.org, have become an important tool for local communities working to build a Culture of Health.

"The County Health Rankings show how important it is to examine all the conditions that impact well-being and can help families thrive,” said Risa Lavizzo-Mourey, MD, RWJF president and CEO. “Communities around the nation are using the County Health Rankings to drive improvements in education, housing, job training, healthy food options and more, as they work to build a Culture of Health."

This year’s Rankings data also takes a closer look at health gaps in each state, comparing how the top performing counties stack up against the bottom performing counties on key measures. Enormous differences in health outcomes can exist within a state.

The Rankings data are only as valuable as the action it inspires and the lives it improves,” said Bridget Catlin, PhD, MHSA, co-director of the County Health Rankings. “Whether it’s addressing health gaps between counties or the concentration of poverty in rural and residentially segregated communities of color—targeting resources to the people and places in greatest need is essential to building a Culture of Health. The Rankings are an important springboard for conversations on how to expand opportunity for all to be healthy.

County Health Rankings & Roadmaps tools, which includes a database of evidence-informed approaches, personalized coaching, and a range of other resources, can assist communities in their efforts to improve health. Visit www.countyhealthrankings.org to learn more.

About the University of Wisconsin Population Health Institute

The University of Wisconsin Population Health Institute advances health and well-being for all by developing and evaluating interventions and promoting evidence-based approaches to policy and practice at the local, state, and national levels. The Institute works across the full spectrum of factors that contribute to health. A focal point for health and health care dialogue within the University of Wisconsin-Madison and beyond, and a convener of stakeholders, the Institute promotes an exchange of expertise between those in academia and those in the policy and practice arena. The Institute leads the work on the County Health Rankings & Roadmaps and manages the RWJF Culture of Health Prize. For more information, visit http://uwphi.pophealth.wisc.edu. The Rankings Show Connection Between Residential Segregation and Health

Over the next three months teams from RWJF and the University of Wisconsin Population Health Institute will visit the RWJF Culture of Health Prize finalist communities to learn more about how they are working across multiple fronts to improve health for all.