Field of Work: Increasing access to flu shots and other preventive services

Problem Synopsis: Every year, approximately 36,000 influenza-associated deaths occur in the United States and approximately 200,000 people are hospitalized. The likelihood of receiving the recommended flu vaccine varies greatly depending on an individual's ethnicity, race, education, and whether he/she has a regular source of health care.

Synopsis of the Work: In 2004, RWJF launched Vote and Vaccinate: A Community-Based Strategy to Promote Adult Immunization (known as Vote & Vax), which sets up influenza vaccination clinics at or near polling places, with a pilot test on Election Day. The program continued as a larger demonstration during the 2006 midterm election. A concerted expansion of the program took place during the presidential election two years later and the program continued through the 2010 midterm election. 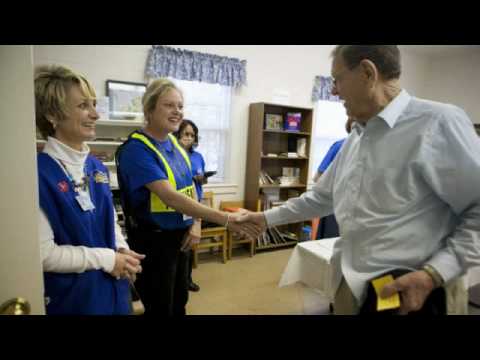 Nearly 40,000 flu shots have been administered through more than 460 Vote & Vax clinics, beginning with the 2004 presidential election and continuing through Election Day 2010.

Vote & Vax is extending its reach through connections with local pharmacies, retail pharmacies, and pharmacies that are part of larger retail chains.

Vote & Vax demonstrates the effectiveness of the polling place as platforms for delivering flu vaccine.

Vote & Vax has had an impact on public health practices beyond seasonal influenza protection, as evidenced by [its] acceptance among many local public health departments and the national Medical Reserve Corps as a prototype for a disaster preparedness strategy.