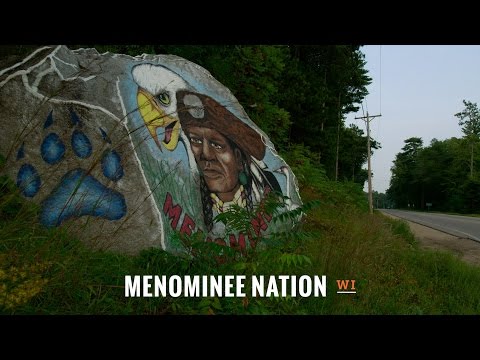 Menominee Nation doctors and teachers don’t ask their patients and students, “What’s wrong with you?” They ask, “What’s happened to you?”

Addressing both historic wounds and more recent suffering, members of the Wisconsin tribe are using a trauma-informed care model to do their jobs, seeking to find the root cause of negative behaviors.

“When we took the usual way of approaching behavioral and other issues, we realized what we were doing was wrong,” says Wendell Waukau, superintendent of the Menominee Indian School District since 2005. “Our policies were pushing kids out the door.”

The tribe’s use of a trauma-informed care model to provide social and behavioral health services has dramatically changed life for its members. The approach’s success is among the reasons the Menominee Nation was awarded this year’s RWJF Culture of Health Prize.

In 2008, fewer than 60 percent of the students who started as freshmen graduated from Menominee Indian High School. At the time, the “drop-out crisis” was seen as something confined to the schools. Tribal members now understand that the challenge in education was a public health crisis with roots that extend well into other areas of tribal life. With its new lens on how to build a Culture of Health, the tribe has a clearer picture of its needs and a sharper path forward.

“That tells us our kids are resilient,” Wendell Waukau says. “It tells us they’re healthy.”

At the nearby Tribal Clinic, Administrator Jerry Waukau (Wendell’s older brother) found that some of the clinic’s practices were alienating patients who needed help. People sought appointments when they were in crisis. If they needed to wait several days to schedule an appointment—that might not help, or might even be too late.

“We shifted our approach to be patient-centered and changed to a same-day appointment system. Now you tell me when you want to get in,” Jerry Waukau says.

For the past several years, Menominee County, which has the same borders as the Menominee Indian Reservation, has ranked 72nd out of 72 Wisconsin counties in the County Health Rankings. The Rankings compare factors that affect health including smoking, high school graduation rates, unemployment, physical inactivity and access to healthy foods and provide a snapshot comparison of counties within every state.

The number 72 comes up often in conversation with Menominee Nation members. It’s seen as a challenge.

“There are a lot of reasons for that last-place ranking,” says Roger William Barr, a psychotherapist at the Tribal Clinic. “When you’re dealing with trauma, change takes a lot of strength and support. Historically, our community has had trouble doing that.”

Recognizing two root causes of the tribe’s problems—poverty and trauma—has informed how other issues are addressed. The community has come together to make policy and systemic changes that will have long-lasting effects:

To understand how advocates applied a trauma-based approach to an entire tribe, one must consider and understand the history of the Menominee Nation. At least 12,000 years old, the tribe once occupied all of what is now Wisconsin and some parts of Michigan and Illinois. Various treaties with the U.S. government carved into its territory, leaving the tribe with less than 400 acres in northeastern Wisconsin.

Then the painful time known as “the boarding school era” began in 1860. Children younger than 15 were forcibly removed from their homes and sent to government schools to assimilate to the dominant culture. Cut off from their families, they were not allowed to speak their own language or practice tribal customs.

In the wake of the searing indignities that spanned generations, the federal government added one more in the 1950s and 1960s: It revoked the tribe’s federal recognition by passing the Menominee Termination Act of 1954, which marked the beginning of economic and socioeconomic decline for the tribe and the deterioration of its rich culture, traditions and language.

The loss of federal recognition brought with it poverty as well as a host of health problems. Traditional tribal businesses, such as logging, suffered as outsiders moved in. The reservation’s one hospital closed, further limiting access to health care. Wendell Waukau remembers standing in lines more than 30 people deep to have a dentist, who only came on Saturdays, check his teeth.

The federal government renewed Menominee’s status as a sovereign nation when it passed the Menominee Restoration Act of 1973, but the damage had already been done. The effects linger, even today.

The stresses of the tribe’s past traumatic experiences manifest themselves in many ways. One way the tribe measures the stress is to look at members’ “ACE” scores. Adverse Childhood Experiences include such things as physical, emotional or sexual abuse or neglect, family substance use or abuse, domestic violence in the family, or mental illness in the family. Scored on a scale of one to 10—with one point for each “yes”—the higher the score, the higher the risk of health and social problems. Any score greater than four is considered a risk.

“Most people I see are four and above, some are even eight, nine or 10,” says Barr, the psychotherapist. “Horrible things have happened to them in life. ... We’re really about helping people get healthier so they are better able to deal with their human experiences.”

Kim Hill, a maternal and child health nurse at the Tribal Clinic, says she was unfamiliar with trauma-informed care, but it makes sense to her now. Raised by her grandmother on the reservation, Hill remembers the Tribal Clinic opening in 1977 and how she clung to a pole outside to avoid being taken in for immunizations. Her grandmother was the clinic’s head housekeeper, and Hill used to visit her at work.

Though she acknowledges her own high ACE score, Hill credits her grandmother and her teachers for where she is today.

“Coming from the community, I know a lot about what people have gone through. One reason I came back to work here was to be a role model. I want people to think, ‘If she can do it, so can I.’”

Indeed, teachers can be game-changers in a young student’s life, especially when they recognize the unseen forces that are influencing a student’s behavior. Ryan Coffey, an elementary school teacher and counselor, says trauma-informed care strategies have helped him keep students on track with their education. Before, he says, the students may have derailed, taking their peers with them.

“[Trauma-informed care] doesn’t take a lot of planning. It doesn’t take extra time. It’s about getting to know your kids.”

A morning mood check-in has been an incredible tool, he says. Before classes begin, students stop by their classroom computer and rate how they feel. Do they best relate to the figure with the red sad face, the yellow one with lips in a straight line or the smiling green one? The process is quick, “but that two minutes can change the whole day,” Coffey says. Teachers then know if someone’s troubled, allowing an early intervention before an incident occurs.

The school system also has established “safe zones” in classrooms, usually corners with comfortable seats. If a student is feeling pressured—be it because of a math lesson or an incident at home—the child can take refuge in the safe zone.

If that break isn’t enough, the student can leave the classroom and go to the Sakom Room. “Sakom” is the Menominee word for “peace.” The room features books, toys, soft furniture and gentle music. Essentially, the student is self-imposing a “time-out” to cool off and think. Coffey, the peace room’s monitor this year, and another counselor are on hand if the child wants to talk.

“It’s about being proactive—before they blow up—instead of reactive. Because these incidents are hard on them, hard on their classmates and hard on their teacher. It’s traumatic for everyone,” he says.

Arming young people with the tools to handle their emotions and feelings is not just a short-term fix, Coffey points out.

“When they get older, those negative coping skills lead to the smoking, the drinking, the drug use. If we give them positive skills now ... those are life skills they’ll use forever.”

In Tribe’s Heritage, Roots of Healing

Part of the process of growing, healing and creating a healthier community is about connecting with the past and nurturing the cultural connections that enrich society.

About five years ago, Menominee Middle School science teacher Grace Kasper received a grant to create a curriculum centered on the surrounding forest. On that first trip, she told the students to use four of their five senses—taste was out, lest someone devour poison ivy—and record what they experienced. She immediately noticed something: Quiet.

“These were the kids who couldn’t sit still in class, and they were listening to the wind,” she says. “They made lists of what they were hearing and smelling and seeing and feeling. I saw at that moment they could sit still. They could concentrate.”

In the forest, Kasper says, the students discovered success. Now they felt at home, in a familiar place. They loved teaching her things as much as she loved learning them. She told the students, “The day you stop learning is the day you’re no longer in existence.”

As the recent school year began, Kasper unveiled a small greenhouse and raised garden outside her classroom, another grant-funded project. On the first day of school, she told students about “the three sisters.” Their ancestors, she said, planted the three sisters—corn, beans and squash—in the same beds because they worked together to become strong. The corn stalk was there for the beans to climb. The beans added nitrogen to the soil that the corn needed. The squash was a barrier against pests and provided shade to keep the earth moist.

Only one student in the class knew the story.

Kasper told them, “This is science, and your ancestors knew this. This is part of who you are.”

She plans to teach a cooking class using items the children have grown. It’s a way to introduce healthy eating and to move them away from fast food.

The goal, she says, is to build on the historic connections between the students and the earth.

“These kids have had so many negative stereotypes brought down on them,” Kasper says. “We need to build their self-esteem. We want to make them proud again.”

Addressing Health from within the classroom

Learn how to build a foundation for health in the classroom from 2015 RWJF Culture of Health Prize winner, Menominee Nation, Wis.