What Will it Take to Help All Kids Grow Up at a Healthy Weight?

We can all play a role in helping children grow up at a healthy weight, including the U.S. Soccer Foundation. Their work is helping make strides in reducing childhood obesity rates. Here's how.

Washington, D.C.’s Shaw neighborhood is named after Colonel Robert Gould Shaw, who commanded the famed 54th Massachusetts Volunteer Infantry, the all-black regiment that fought for the Union during the Civil War. Today, the multi-ethnic neighborhood is home to the U Street Corridor, a revived commercial district known in the early 1900s as “Black Broadway"; Ben’s Chili Bowl, a celebrated city landmark; and Seaton Elementary, a public school whose students are mainly Hispanic, African-American, and Asian.

Like many kids in his neighborhood, Kevin, age 13, never played sports until recently, and was seriously overweight. Then his school was fortunate to become home to Soccer for Success®, a program managed locally by DC SCORES, a Washington, D.C., nonprofit.

Today, Kevin is one of thousands of children nationwide who’ve lost weight, and seen marked improvements in health and fitness, as a result of the physical activity and nutrition components that make up Soccer for Success.

Soccer for Success, a program of the U.S. Soccer Foundation (an RWJF grantee), now serves approximately 30,000 youth in 34 cities. It focuses especially on communities where obesity rates exceed the national average. “One of the good things about soccer is that boys and girls play equally, so you can have one program in an after-school setting,” says Ed Foster-Simeon, president and CEO of the U.S. Soccer Foundation. “It’s also low cost, because all you need is a little bit of space, and a ball.”

Besides advancing physical activity and healthy lifestyle choices, Soccer for Success also emphasizes coaches’ mentorship of kids, and engagement of entire families in the benefits of sports and nutrition—in locations around the country where those factors may be in short supply. As such, Soccer for Success is a prime example of fighting broad national health problems like childhood obesity through approaches specifically tailored to the needs of communities most affected by them.

"As RWJF launches its efforts to ensure that all kids grow up at a healthy weight—no matter who they are or where they live—there will be a broadened and intensified focus on closing health disparity gaps that currently exist", says Ginny Ehrlich, director of the Foundation’s efforts to reduce child obesity.

“There’s a lot of buzz around the notion” that rates of child obesity are leveling off or falling in many states, especially among the nation’s youngest children, says Ehrlich. “But we still have a lot of work to do, and we can’t claim victory until all kids have the opportunity to be healthy.”

Kids, that is, like Kevin Alvarez, whose soccer career—and path to lifelong health and fitness—now seem unstoppable.

Live Discussion: Helping All Kids Grow Up at a Healthy Weight

On Friday, March 6, the Foundation hosted a discussion on its renewed commitment to help all children in the United States grow up at a healthy weight. The conversation touched on strategies to eliminate the health disparities that contribute to higher obesity rates among children of color and children living in poverty. 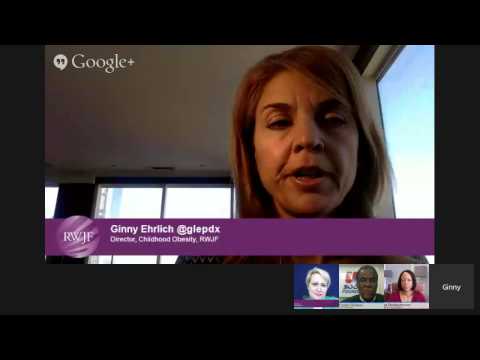