“When you hear hoofbeats, think of horses, not zebras,” the late Theodore Woodward, a professor at the University of Maryland School of Medicine, cautioned his students in the 1940s. Woodward’s warning is still invoked to discourage doctors from making rare medical diagnoses for sick patients, when more common ones are usually the cause.

And while many Americans have worried about contracting Ebola—in viral terms, a kind of “zebra”—more commonplace microbial “horses,” such as influenza and measles viruses, continue to pose far greater threats. For instance, a large multistate measles outbreak has been traced to Disneyland theme parks in California—while this year’s strain of seasonal flu has turned out to be severe and widespread.

One obvious conclusion is that many microbes remain a harmful health menace, expected to kill hundreds of thousands of Americans this year. Another—speaking of Disneyland—is that much of America appears to live in a kind of fantasyland, thinking that it is protected against infectious disease.

That’s the grim subtext of the 2014 edition of Outbreaks: Protecting Americans from Infectious Diseases, the annual report released last month by Trust for America’s Health and the Robert Wood Johnson Foundation. “Millions of Americans could be spared and billions of dollars spent on healthcare could be saved with better infectious disease prevention and control,” the report concludes. Consider:

The report drives home that “we are only as prepared for these threats as the community that is least prepared among us,” observes Paul Kuehnert, DNP, RN, director of the Bridging Health and Health Care portfolio at RWJF. And Outbreaks identifies scores of other risks beyond common communicable diseases, including food-borne illnesses like salmonella and hospital-acquired infections like MRSA.

The report advances a series of recommendations, including modernizing surveillance to allow for better real-time disease tracking, and boosting so-called medical countermeasures—including research on new vaccines, diagnostics, antiviral medications, and antibiotics. (Note that, with 2 million Americans falling ill and 23,000 dying each year from antibiotic-resistant infections, President Obama has called for nearly doubling federal spending on fighting antibiotic resistance to $1.2 billion in fiscal 2016.)

Vulnerability to infectious disease outbreaks is just one aspect of the nation’s health defenses captured in another RWJF-sponsored effort: the National Health Security Preparedness Index. A composite of 194 measures, the index depicts the capabilities of the 50 states in six areas: health security surveillance; community planning and engagement; incident and information management; healthcare delivery; countermeasures management; and environmental and occupational health.

Thomas V. Inglesby, MD, who directs the UPMC Center for Health Security, and who chaired the steering committee behind the preparedness index, describes it as “the first really comprehensive attempt to measure preparedness in all its dimensions and improve quality over time.” An interactive map on the index’s web site illustrates which states rank highest, including Virginia, New York, and Utah. At the low end are Alaska, Georgia, and Arkansas. Overall, the country scores 7.4 out of 10. The index didn’t label it as such, but that’s  about a C grade.

Not surprisingly, a number of states aren’t happy with the rankings, or their place in them. But the results shed light on what states must do to boost their preparedness, while future installments of the index will also help policy-makers gauge progress, Inglesby says.

In other words, think of the preparedness index as a road map for helping us get out of fantasyland, and confront reality on the critical topic of health security.

What have we learned from recent infectious disease outbreaks, like Ebola and H1N1? On Friday, February 6, the Foundation hosted an online chat with notable disease prevention experts, Tom Inglesby, MD, chief executive officer and director, UPMC Center for Health Security and Suzet McKinney, DrPH, MPH, deputy commissioner, Bureau of Public Health Preparedness and Emergency Response and Division of Women & Children’s Health, Chicago Department of Public Health, on the state of preparedness in America, including a discussion about the new National Health Security Preparedness Index. 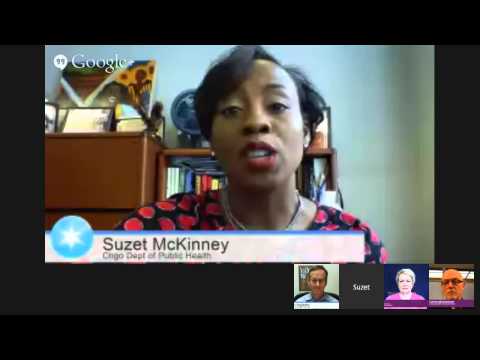