“The only thing we know about the future is that it will be different,” wrote the late management guru Peter Drucker.  To the list of society’s sectors that are struggling with that conclusion, add government-funded public health.

State and local health departments face growing challenges, including infectious disease threats such as Ebola and chikungunya; a rising burden of chronic illness; an increasingly diverse population; even the health impact of global warming. At the same time, fiscal constraints accompanying the 2007–2008 recession and its aftermath hammered local, state, and territorial health agencies, which lost nearly 30,000 jobs—6 percent to 12 percent of their total workforces—from 2008 to 2013.

With fewer hands—and heads—to carry out the critical and evolving work of public health, agencies have little choice but to adapt, says a recently published report funded by the Robert Wood Johnson Foundation and produced by the nonprofit organization RESOLVE. “We have to rethink and reimagine what governmental public health does, and how we do it,” says Paul Kuehnert, who directs the foundation’s work on bridging health and health care and formerly served as the county health officer and executive director for health in Kane County, Ill.

As the RESOLVE report outlines, a traditional role of public health agencies as direct service providers—for example, offering immunizations; family planning; and preventive screenings, especially to low-income populations—is likely to fade, as many of these services are now covered in health insurance policies under the Affordable Care Act. The trend is likely to open up opportunities for health departments to move into new roles as “chief health strategists” for a community or region, and to convene others to shape and carry out broad plans for improving population health.

Around the country, a number of public health agencies and departments are already assuming this role, and adopting key practices enumerated in RESOLVE’s report. Consider two examples, one local, one state, of health departments that are leading the way:

The Public Health department of Seattle and King County, Wash., is employing several key practices identified in the RESOLVE report: Identifying leading causes of illness, injury and premature death; collaborating with a broad array of allies; building bridges to the health care system; and developing strategies tailored to today’s communities.  A case in point is the Global to Local Initiative, which focuses on the cities of SeaTac, near the Seattle airport, and Tukwila—two immigrant-rich areas where more than 80 languages are spoken, and the overall health status is on a par with some communities in sub-Saharan Africa.

Under the initiative, the health department partnered with a premier local hospital and health system, Swedish Health Services; HealthPoint, a local nonprofit network of medical, dental, and school-based health centers; Washington State University; and the Washington Global Health Alliance (which represents the state's largest global health research and delivery organizations, as well as global health nonprofits such as the Bill & Melinda Gates Foundation). The partnership’s focus is “a simple one, which is, let’s take what works in other places and apply them here,” county health officer David Fleming explains in a video. As a result, the partnership is now adapting approaches used in resource-poor settings abroad to improve health locally. These include training and developing a cadre of community health promoters to work with the local population—including many African immigrants—and developing a community initiative to spark entrepreneurship in food-related businesses aimed at promoting healthy eating.

Maryland’s State Department of Health and Mental Hygiene, meanwhile, is also engaged in initiatives employing principles from the RESOLVE report. One is drawing on real-time data and channeling it to communities to help them improve health.

Under an arrangement struck with the federal government and private insurers, Maryland’s hospitals now effectively operate under global budgets—a reality that gives them new incentives to curb costs by keeping people healthy and out of the hospital. Thanks to the state’s health information exchange, data on the top five causes of hospital admissions and readmissions can readily be compiled and given to communities so they can address the underlying health issues.

Laura Herrera Scott, Maryland’s deputy secretary of Health and Mental Hygiene, points to a collaboration now occurring on Maryland’s largely rural Eastern Shore. There, a 62-bed hospital, —is drawing on the state-compiled hospital data to identify people with conditions such as congestive heart failure and diabetes who are frequent hospital users. Through a partnership with the Worcester County health department, and with the aid of a federal grant, the hospital has instituted a patient-centered medical home approach in its seven primary care practices that is working to keep more of these patients healthy and at home.

“Destiny is no matter of chance. It is a matter of choice,” said the famed American orator and politicians, William Jennings Bryan. Public health departments now have the chance to forge new roles for themselves, and improve the health of millions of Americans as well.

On Friday, December 5, the Foundation hosted a discussion focused on innovations in public health and findings from the Public Health Leadership Forum's report, The High Achieving Governmental Health Department in 2020. Susan Dentzer, senior policy adviser to the Foundation, led a discussion with public health innovators on the vision for the future of public health as we move towards 2020; the concept of public health departments as Chief Health Strategists; and the reduction of the leading causes of preventable death and disability, with a special emphasis on underserved populations and health disparities. 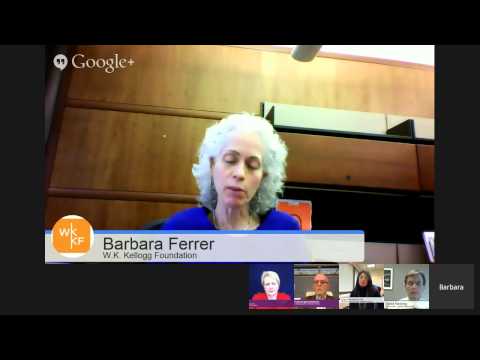