Can fear of the ill effects of smoking push people to break their cigarette addiction? That’s what the Centers for Disease Control and Prevention (CDC) is banking on with its first ever national paid media campaign, “Tips From Former Smokers,” which shows smokers who quit, but not before losing a great deal, including legs, fingers, a larynx and the opportunity to shoot hoops with their kids.

>>Read an UPDATE on the impact of the Tips From Former Smokers campaign in a dramatic uptick in calls to 1-800-QUIT-NOW. 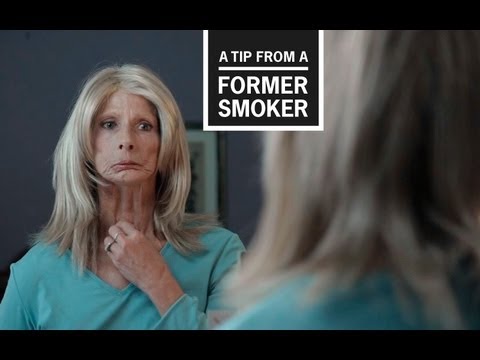 The idea behind the new campaign is that the danger of smoking is usually talked about in terms of deaths of thousands or more. The new ads, according to the CDC, provide a perspective on real people who used to smoke and became ill as a result. Most of the people in the ads—none are actors—were diagnosed with smoking-related illnesses in their 30s and 40s; one was only 18.

The CDC is also counting on the campaign to counter promotion efforts by cigarette companies. “The tobacco industry spends $10.5 million a year—more than one million dollars every hour—to entice kids, keep smokers hooked and glamorize their deadly and addictive products,” says Matthew L. Myers, president of the Campaign for Tobacco-Free Kids. “The CDC’s campaign will tell the harsh truth about how devastating and unglamorous cigarette smoking truly is.”

At a press conference to launch the media campaign, Thomas Frieden, MD, CDC Director, said he had been skeptical that ads would work when he was health commissioner of New York City, but a one year pilot proved otherwise and had a dramatic effect on smokers quitting during the time they aired. Read more from the Campaign for Tobacco-Free Kids on the evidence that mass media campaigns are effective in reducing the number of children who start smoking and increase the number of smokers who quit.

Some ads will be in Spanish, and are also tailored to certain communities, according to Dr. Frieden, such as an ad that focuses on asthma, which impacts the Hispanic community in large numbers.

Also effective, according to CDC research, is the opportunity for smokers to hear quitting tips from people who have given up tobacco, and tips are included in the ads including throwing away cigarettes and ashtrays, letting online friends know you’re planning to quit and identifying a strong reason to quit—such as wanting to see a child grow up. Ads include a toll free phone number (1-800-QUIT NOW) and the web address for quitting resources: www.smokefree.gov.

Recommended Viewing: Every ad released by the campaign is sad and compelling. In this ad, Jessica, a young single mother, who never smoked, talks about her young son Aden’s asthma—a condition linked to Jessica’s mom, a smoker, who looked after Aden when he was a baby.